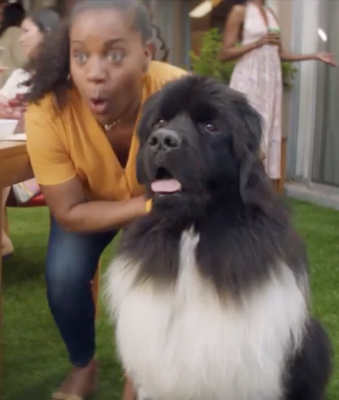 Watch the video below to see something you don’t see in a commercial every day:

It’s not that there’s a dog in the commercial, or even that it’s a Newfoundland. It’s that it’s a Landseer.

In American and Great Britain, the Landseer is considered the same breed as a Newfoundland, a version that has a white base coat with black markings.

In some European countries, however, the Landseer is considered to be a totally different breed. Some are of the opinion that Landseers have longer legs than Newfies, aren’t as massive, and that their muzzle is shorter and more “squared-off.”