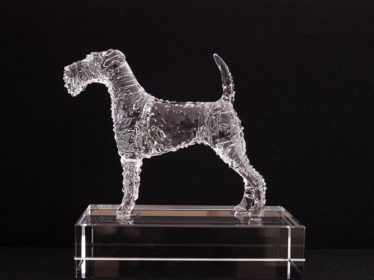 What breed do you supposed was being spoken with the following quote: “He does not throw away his priceless devotion and loyalty on every stranger who may chirp to him. But to the death he is the comrade and protector. … He is an Irish gentleman of the deathless old school; a fiery, true gentleman from the tips of his braced toes to the rough thatch of his crown. He is more; he has a heart three sizes too big for his shaggy body … He is no bully, but he will flinch not one hundredth of an inch from the fight that is forced on him, be the odds so impossible against him.” 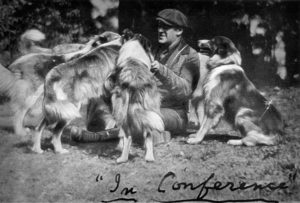 Albert Payson Terhune with his Rough Collies from Wikicommons

The word, “Irish” will have narrowed your options (but isn’t it a tribute to Irish breeds that much of what was described could be said of them?)  In this case, however, the words were written of the Irish Terrier, a breed we will be featuring as a Purebred of Interest feature on our Facebook page on August 2. Guess who wrote them?  American Albert Payson Terhune, a Collie breeder better known for having authored Lad: A Dog, a novel of twelve short stories based on the life of his real-life Rough Collie, “Lad.”

Leave it to an Irishman, however, to keep it short and simple when weighing in on what an Irish Terrier should be: “Red, racy, and Rectangular,” qualities William Graham thought were essential to the breed. A founder of the Irish Terrier Club, and an Irish Terrier breeder, himself, for over a quarter of a century, the genial Graham had a hand in some of the most important exportations of Irish Terriers abroad which earned for him the nickname. “The Irish Ambassador.” Also known for his wit, Graham once jested that “the only reason Irish Terriers weren’t itemized in Noah’s list of the cargo of the Ark was that it was highly unnecessary to take a pair of Irish Terriers aboard. They could swim alongside so well.”

We look forward to August 2!!