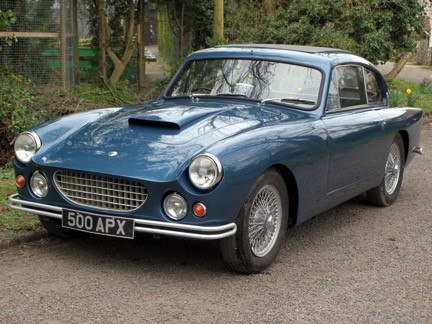 The 1961 AC Greyhound seen here didn’t set the world on fire when it was first made, and today’s car enthusiast may remembered it more for the Ace roadster that provided the basis for the Shelby Cobra. The AC debuted at the Earls Court Motor Show in 1959 and production began the next year. Based on the AC Ace and AC Aceca with a 2+2 seat coupe body,  the car ended up being just too large and clunky to compete against the sportier AC Ace/Aceca, and it was soon discontinued. It was an unfortunate mismatch of vehicle to name, but just in case you have one collecting dust in an outbuilding, you might be interested to know that an AC Greyhound in decent shape has a current value of $84,900. 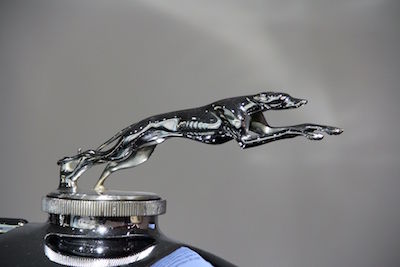 War II was nicknamed the “M8 Greyhound” by the Brits. It had superb on-road mobility which made it a great supportive vehicle in the advancing American and British armored columns, but anti-tank mines easily penetrated lightly armored hull floor and that was a decided drawback.  Nevertheless, the armored car was produced in large numbers, and it’s said that you can still find it on the road in some countries.

Interestingly, Ford’s association with the Greyhound dates back before WWII.  Henry Ford’s son, Edsel, conceived the idea for the 1927 Ford Lincoln, and because he thought that the Greyhound dog was the perfect symbol of speed and beauty,  the breed graced the cars as hood ornaments. They were created using the same lost wax method as Rolls-Royce, cast in brass and then chrome plated. Lincolns sported the Greyhounds until the 1930s when Ford switched to a coat-of-arms and knight’s helmet hood ornament. Ford picked up where Lincoln left off, featuring the Greyhound on vehicles like the Model 48 and DeLuxe Fordor until 1936.  As slogans went, “speed, stamina and beauty,” didn’t have the poetic ring of Jaguar’s “grace, pace and space,” but it still sold a lot of cars.