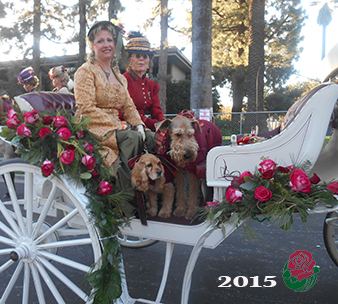 The Victorian Roses Ladies Riding Society is a reenactment club from Southern California that rides in parades and appears at events to raise money for charity.  The participants ride and drive a variety of horses wearing outfits they designed and sewed, themselves, ensembles that represent upper-class fashion of the Victorian Era. The group has appeared five times in the Tournament of Roses Parade, and if you watched the most recent one in 2017, the sharp-eyed among you caught the Airedale riding in their carriage. If you missed it, check out the video below at the :08 second mark.  It is a guess on our part that the dog is Sioux Munyon Swart’s Airedale, “Katie” because Katie also rode in 2015 Tournament of Roses Parade with her canine “brother,” Cocker Spaniel, “Ricky Ricardo.”