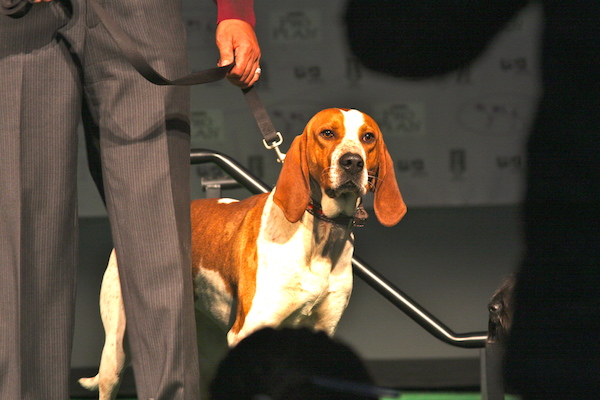 Their owners brought them over in ships to the New World, their beloved English Foxhounds. The dogs, however, struggled with the hotter climate of Virginia and Maryland where a high number of their masters settled. The hounds had to work on a terrain that was far more rugged than what they were accustomed to England, a vastness of mountains, undeveloped woodlands, and swamps.  The critters were different, too. In England, most of what a Foxhound hunted ran or escaped down a hole to evade capture, but in America, they climbed trees!

It didn’t end well for many of the dogs. Heat exhaustion, new diseases, parasites, and things that slithered took a heavy toll on the British dogs.  In hindsight, it ultimately resulted in a breed better adapted to work in America. The expense of importing a dog from Europe (if the dog made it alive across the ocean at all) meant that few dogs were brought to America, and those that did arrive were often cross bred with each other.  By the 18th century, the dogs came to be known as Virginia Hounds, distinctly different from their British counterparts.  Over time, the dogs were “tweaked”  by Robert Brooke, Thomas Walker and even George Washington, and the end result is a terrific dog we now call the American English Coonhound, though for a time they were known as the English Fox and Coonhound.

While the original hounds were used to hunt fox by day and raccoons by night, today’s American English Coonhound is a wide-ranging hunter that takes by surprise most people with its tremendous speed and endurance.  In fact, of the coonhounds, it may be the one breed used to hunt non-raccoon quarry the most frequently.  It’s also been said that this coonhound is the one usually kept in the largest packs.  The breed remains almost exclusively a working dog, and some sources suggest that the vast majority of owners are either active or retired hunters.