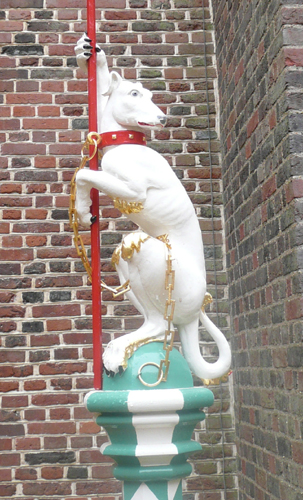 In 2009, a garden was created at Hampton Court Palace to commemorate the 500th anniversary of King Henry VIII’s accession to the throne. The garden includes the heraldic beasts that represented Henry’s lineage and reinforced his claim to the throne. Among them is the White Greyhound of Richmond, a symbol of loyalty and celerity.

The Greyhound appeared on the heralds of many notables, Edward III, being one. The descendents of the House of Lancaster (from which Henry VII came) was another important personage, as was Edmund Tudor, the First Earl of Richmond, and Henry VII’s father . He was granted a white Greyhound as a heraldic supporter by his half-brother Henry VI (what is family for?) which is why it was known as the “Greyhound of Richmond.”

Greyhounds were a favorite among Tudors and were seen being supporters of the arms of both Henry VII, and occasionally of his son, Henry VIII.