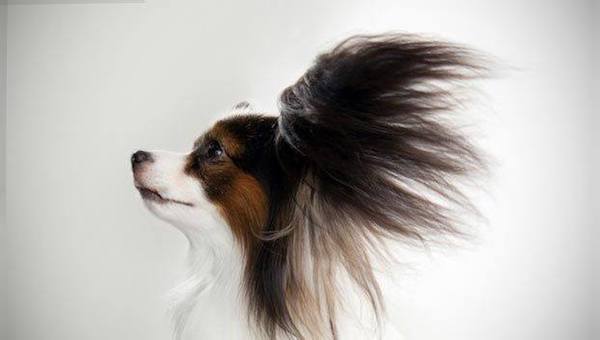 As of now, no gene test exists that will help determine ear type (and in dogs, there are a whole lot of them), but canine genetics research has already revealed genetic variants that are statistically correlated with ear phenotypes. Researchers suspect a currently unknown causal mutation or variant may be somewhere in the vicinity of the tested variant that is showing the statistical correlation.

Even though dog breeds show great diversity in ear morphology, few breeds have much “wiggle room” for what’s acceptable in the breed standard. The Standard Manchester Terrier come to mind as a breed with three options: Naturally erect ears, cropped ears, or button ears, and, of course, a Papillon can be born with signature butterfly ears, or floppier, drop ears known as “moth” ears making the Papillon a Phalene.

Focusing on the latter breed, one theory suggests that the Phalene was the original form of the breed and the erect ears of the Papillon were a product of crossing with spitz-like dogs.  We know from 16th century art that these little dogs of the day were drop eared, but by the 19th century, erect eared dogs were showing up on canvases. Both can appear in the same litter.

And then there’s the fringe.

Fringe is the hair growing at the ends of a Papillon’s ears, and as far as we can tell, there are a few things to know about it: As much as the butterfly ears are a signature part of the breed, fringe sets off the ears, and a Papillon can’t have too much of it. It’s rarely, if ever trimmed. That said, not all Paps are genetically programmed to grow the same amount of fringe. Clear red colored Papillons, for instance, don’t not carry as much fringing as a black or tri-colored dog, or even a sable with heavy black overlay. That said, how much fringe a Papillon will have is influenced by its age and coat care (drying the fringes first, for example, will prevent dreaded fringe wrinkles, and when drying ear fringes, one should begin by starting with the hair on the back of the ear first, and working one’s way to the inner side remembering to always go parallel to the direction of hair growth). And you thought fringe was easy.

To read a modern fable on how the Papillon got its ears, click here.

The image of GCH Salatino Entre L’Amour Et Le Devoir (handled to his AKC championship and Grand Championship by Pat Anders) is from Animal Planet. Consider checking out their page on the breed here: http://www.animalplanet.com/breed-selector/dog-breeds/toy/papillon.html

4 thoughts on “Those Marvelous Papillon Ears”