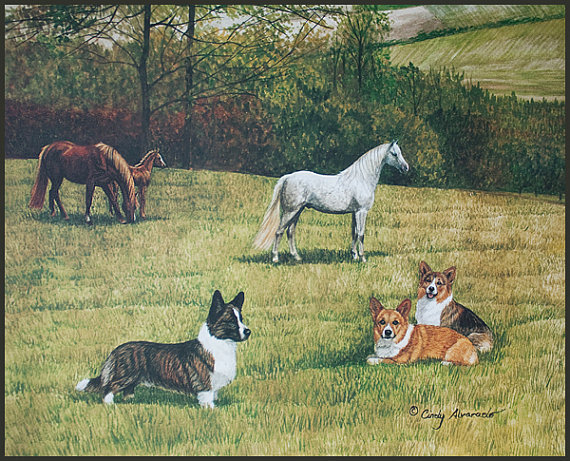 There was a time in England, however, when for a very brief time, the Cardigan Welsh Corgis and Pembroke Welsh Corgis were interbred because they were considered one breed divided into two types. The Kennel Club (England’s version of the AKC) even had them listed in its studbook as a single breed which allowed the two types to be crossed.  This error was amended in 1934 when after years of vigorous complaints by the frustrated breeders of each, the Kennel Club finally listed them as the two very distinct breeds they are. The catalyst for this move may have been formed years earlier when the English Cardigan Welsh Corgi Association was organized in 1926. After nine years of protests and lobbying by breeders, fanciers, and the club itself, the Kennel Club separated the two breeds in 1934 as they should have been from the beginning. This undoubtedly helped influence the AKC to also admit the two as separate breeds.

It’s difficult to imagine that the two were ever thought of as anything other than two very distinct breeds they are.  The Cardigan has a longer body, slightly heavier bones, larger and rounder ears at the tips, rounder feet that tend to point outwards, and of course, a tail.  The Pembroke’s ears are erect, firm, and taper slightly to a rounded point, and his more oval shaped feet generally point straight forward.  Differences extend to temperaments, as well. When inquiring about the distinctions between the two breed personalities, we were once told that a Cardigan Welsh Corgi could be seen as the friendly but reserved butler greeting party guests at the door, while the Pembroke would be swinging on a chandelier reciting bawdy limericks to the other party goers.

For anyone who struggles to tell the two apart, here’s a nemonic device:  A cardigan sweater has long sleeves. Remember that the Cardigan Welsh Corgi has a long tail.