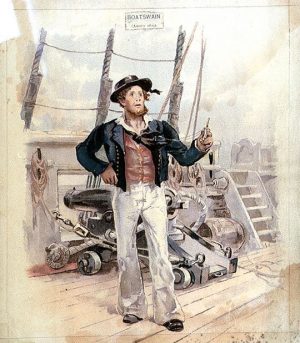 Dog nerds (folks who can’t get enough information about dogs) are familiar with the Newfoundland, “Boatswain.” Acquired by the Lord Byron, when the British poet was just fifteen years old, Boatswain died of rabies; a bereft Byron wrote the tear-jerker, “Epitaph to a Dog” in 1808 as tribute (though some believe the poem was written by Byron’s friend, John Hobhouse, to honor Byron’s dog).  Whoever wrote it, the poem is inscribed on Boatswain’s tomb (larger than Byron’s) at Newstead Abbey in England.

Byron’s dog, however, was not the only Boatswain of importance in dog history. The first Irish Water Spaniel we know of was also named, “Boatswain,” a dog bred by an Irishman from Dublin, Justin McCarthy, and born in 1834. This “Boatswain” is credited with giving the breed the appearance it has today, and all modern Irish Water Spaniels are said to descend from this dog. “Boatswain,” who was rumored to have lived to be 20 years old, sired many well known gun and show dogs throughout his long life. At a Birmingham show in 1862 (other sources say it was 1866),  “Doctor,” a great-grandson of “Boatswain,” was awarded first place among Irish Water Spaniels.

As names go, “Boatswain” is a pretty good name to give a water dog. It’s the name given to a naval ship’s officer in charge of the components and crew dealing with a ship’s hull. And know you know.