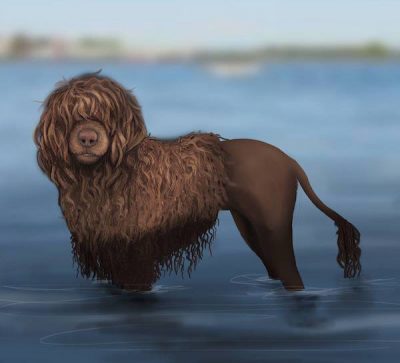 It was a rich Portuguese businessman with an interest in dogs who “rediscovered” the treasure that is this breed. Vasco Bensaude was introduced to a PWD, and though few dogs were left that were still working on the boats, Bensuade did eventually find and acquire a PWD he named “Leão.” In time, he also found other dogs and began a breeding program, though Leão was always his favorite. The dog was considered to be such a quintessential model of breed type that the first breed standard was based on him. Leão died in 1942, but he was the founding sire of the modern breed and had sired so many puppies that it’s said that roughly half of all modern PWDs will have Leão in their ancestry. Bensuade’s other legacy was to inspire other Portuguese breeders to preserve this terrific native breed.

Image: PWD by Marthe painting under the name, “Reenama”
Find and support her work here: http://reenama.deviantart.com