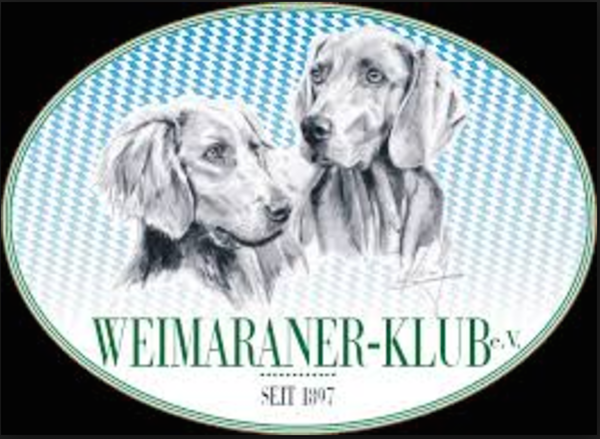 Did you know that there’s a long-haired Weimaraner?

The Long Haired Weimaraner is listed as a “variety” by England’s Kennel Club: From its breed standard: “Coat: Short, smooth and sleek. In long-haired variety, coat from 2.5-5 cms (1-2 ins) long on body, somewhat longer on neck, chest and belly. Tail and back of limbs, feathered.”

The German Weimaraner Club has a long-haired Weim as part of its logo (as seen at the left). That said, the AKC breed standard indicates that a distinctly long coat is a disqualification.

In a 1952 “President’s Report” from the Weimaraner Club of America, the argument opposing long-hair in the breed was presented: Weimaraners with the recessive gene for long-hair bred with dogs with the dominant short-hair would result in litters in which some pups would be short-haired, but carry the long-hair gene; breeders wouldn’t know what was being bred or introduced into their lines. Around that time, efforts to change the standard to disqualify the Longhair were made (and the “Blue” color along with it). Initially, the AKC rejected the move to DQ  both the Longhairs and Blues, but in the 1953 proposed standard which was approved, both were subsequently classified as serious faults. The standard was updated in 1971, and the disqualification for a long coat remained. The December 14, 1971 standard is the Weimaraner’s current standard.

As far as we can tell, long-haired Weimaraners occasionally show up in breedings between shorthaired parents. While breeding such genetically mixed dogs, there will be 25% Short haired, 50% genetically split,  and 25 % Long haired in the first generation. The pups grow up to be described as resembling a field setter with hair about two inches long and feathering appearing on the ears,belly and tail.

We have no proverbial “dog in the fight,” and are passing along information only so that you know. And now you do.

3 thoughts on “The Weimaraner’s Coat: The Long and Short of It”