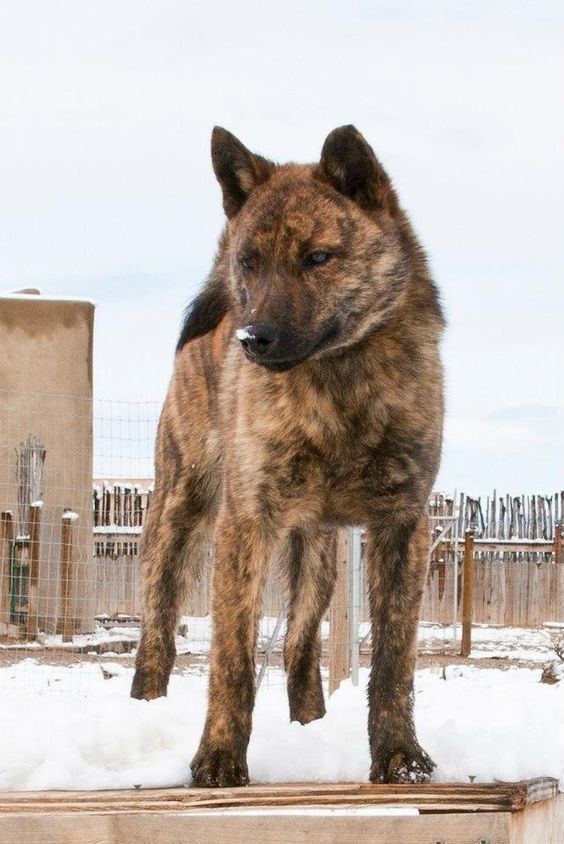 If we were to challenge you to identify the family of breeds which share a wedge head, prick ears, almond shaped eyes, a strong jaw,  thick coat, and a fluffy tail typically curled over the dog’s back, we’d bet that you would correctly identify them as spitz-type dogs. We’d also wager that most of you could easily name several of them.  That said, we suspect that one breed that may not be among the ones you name is the Kai Ken, probably because it’s a rare breed that few of us have ever seen in person.
The Kai, also known as the Tora, or Tiger Dog, is a native of Japan, and a pretty interesting breed. These dogs were wild and living in the mountains in the province of Kai on a land-locked area known as the Yamanashi Prefecture.  Because they were geographically isolated by mountains for a long time (their area sits at the base of Mount Fuji in the Kōfu Basin), cynologists believe the Kai Ken may be the purest and most ancient of all Japanese dog breeds.
When a lawyer living in Kofu city, Daisuke Adachi, happened to see one of these tiger-striped dogs, he was intrigued. Unable to shake the image out of his mind, Adachi went looking for them and managed to find some in Ashiyasu Village. He committed himself to preserving the breed, and with the help of the Japanese Dog Preservation Society – or Kai Ken Aigokai –  the breed became recognized as a Japanese National Monument in 1934.

Under protection, breed numbers grew. One source writes that people were even given stipends, or rewards, for owning a Kai Ken.

They are natural hunters, and will swim and climb trees to get at their game. They are clever, intelligent, and independent dogs who are said to be one of the best dogs an outdoorsy person can have. They do tend to be more vocal than the other Japanese breeds, but are described as the only NK dog breed not predisposed to dog aggression because it’s the only native Japanese breed that wasn’t used for dog fighting at any point in its history.  They can be slightly stubborn, possibly because after having survived for so long on their own, “knowing what’s best” is in their DNA.

The Kai Ken wasn’t recognized by the Japanese Kennel Club until 1934, the same year it was designated a “Natural Treasure.” Kais were first imported into the US in the 1990s, and currently, the breed is an AKC FSS breed. When fully recognized, it will take its place in the Working Group.

Photo of Yamabushi no Shakko by Yamabushi Kennel appears with consent.  Additional note: “Shakko” is a particularly special Kai because he was lost by his owner in Northern California. Incredibly, he lived in the wild for three years before he was captured by Animal Control and returned to his people in New Mexico. He is, in fact, a celebrity in the the Kai Ken community.