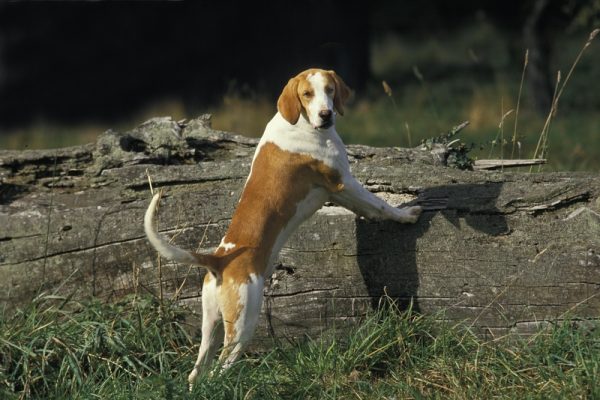 When Michael Hoomanawanui was drafted by the St. Louis Rams in the fifth round of the 2010 NFL Draft,  he signed a four-year, $2.4 million contract. Two years later, he was cut by the Rams, but picked up by the New England Patriots and played in the AFC Championship in his first season with the Pats (they lost to the Baltimore Ravens).  In 2015,  Hoomanawanui was traded to the New Orleans Saints. We found no evidence of his retirement, but given that he once stated that he lost count of how many concussions he’s had, one hopes that Hoomanawanui has long since stepped off the gridiron. We mention the “Hoo-Man” (his nickname) because of his name. It’s long, and a challenge to fit on the back of a jersey.

In 1904, handlers wore armbands with the catalog number of their dog for the first time, a smarter option than putting a pinnie on the dog because the Nova Scotia Duck Tolling Retriever’s name would run off the fabric and continue on the other side (that’s a joke). Still, the Toller currently has the longest name in the AKC, and that would change if the Grand Anglo-Français Blanc et Orange is ever recognized.

This most robust of the pack hounds, more French than English, draws its strength, stamina, hardiness, and head shape from its English Foxhound ancestors. The Orange and White is only one of the three Great Anglo-French pack hounds, French hound breeds that were crossed with English blood, the first crosses occurring in the 16th century. Only in the late 1800s did master hunters realize that this was a pretty great dog, and came to better appreciate this “all terrain” hunting fool. Deer, fox, boar, rabbit – there wasn’t (and isn’t) much this versatile dog can’t hunt.

That said, there are a couple of things that make the breed unsuitable as a family pet in a suburban setting. There’s the howling (it is, after all, a hound), and the roaming because of his insane drive to hunt.  Training, too, can be a challenge as the White and Orange can be willful and downright stubborn. Add its high energy, and little wonder the breed is happiest when in a pack owned by a club, hunting lodge, or serious hunter. In fact, in France, the breed makes up almost 75 percent of all hunting dog breeds.

Purists recommend that these dogs be used in the style of hunting called chasse-à-courre, literally translated as “hunting to run.” This hunting style in which game is pursued with a pack of hounds has been used for over two millennia. When we write that purists prefer this style, it is because it relies on using dogs whose instinct plays a decisive role in the hunt. Although the 17th century grandeur of a chasse-à-courre  hunt didn’t survive the 18th century, many thousands of French men and women follow the present spectacle of the chasse-à-courre to this day. There are groups devoted to “Order Dog” (a category of hound) such as the Order Club (associated with the Société Centrale Canine) and the Facebook page, Club Français du Chien d’Ordre (be sure to check out the videos on that page). According to the Federation Nationale Des Chasseurs, hunting with hounds brings together 10,000 hunters in France as well as 100,000 occasional followers. Les veneurs breed, raise, and care for 30,000 hounds across the country, and 7,000 hunting horses, most of them saved from slaughterhouses because they aren’t fast enough to race, are used in the hunts in which the hunted animal escapes the pack three times out of four.

The breed was recognized by the United Kennel Club in 2006.