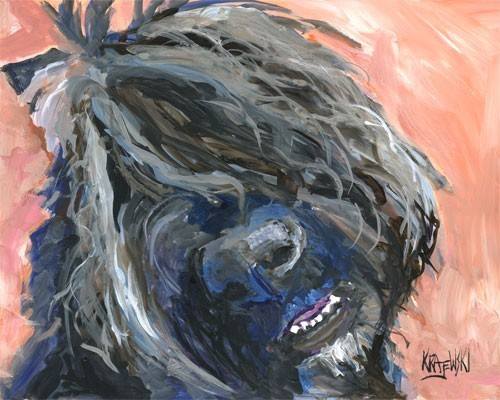 …at least according to several Internet sites. The Bouvier is a stoic breed, and not in a good way. They have such a strong threshold for pain that when a Bouvier gets injured, vets often can’t tell where it hurts because the dog is so strong. One website reports that a working Bouvier can take a lot of contact with a cow’s legs either without feeling it, or simply ignoring the pain. This doesn’t make them a vet’s favorite patient since the vet can’t tell where the dog is hurting by manipulating the legs and/or other body parts.

Petful.com writes, “It is worth noting that the Bouvier has a high pain threshold. This may make identifying an injury or ailment by moving the legs difficult.”

Dogville’s.com writes, “The Bouvier has a high pain tolerance, probably due to his long history of herding cattle and being able to be kicked by a cow and just keep doing his job.  Just something to keep in mind when you bring him home.”

Dogbreedinfo.com reports: “The Bouvier has a very high pain threshold. They can take a lot of contact with the cattle’s legs without feeling it.”

You get the idea, but do note that the Bouvier de Flandres Club of America, nor the AKC make any such claims, and for a good reason. There are a lot of misguided (or plain ignorant) people out there who might think it’s cool to own a breed oblivious to pain. All dogs feel pain, including the Bouvier, but some are so intent on doing their job that they ignore it to their detriment. Pain – and ignoring it – always catches up to a dog (and the owner). For those of us who own these stoic breeds, it’s actually a serious problem. What’s a caring owner to do? How do you tell when something is amiss in your breed?