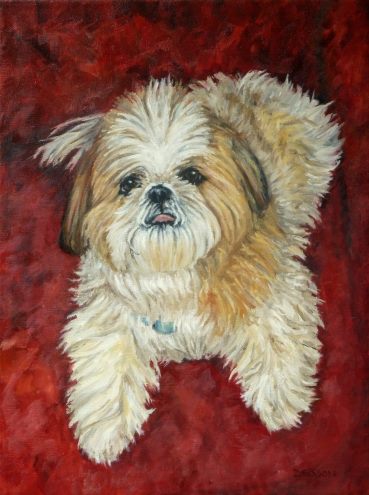 The narrative of a Buddhist legend tells of Buddha Manjusri, the God of Learning associated with wisdom, doctrine and awareness. Manjusri always traveled with a little lion dog who, when faced with great distances, would turn into a full-sized lion and carry Manjusri on his back.

It’s an interesting concept because the ancient Chinese knew little of lions. The big cats weren’t indigenous to China (although one or two may have been glimpsed in royal zoos as a result of the animals having been given as tribute to rulers). Nevertheless, artists created statues of Chinese Lions as they perceived them, and the interpretations ended up looking very dog-like. Curio-collectors would later call these statues, “foo dogs,” but the Chinese name for them was Rui Shi (auspicious lion). According to the book, “29 Chinese Mysteries,” English speakers mispronounced the name as “Shitzu.” It’s a charming legend, if nothing else, but undisputed is that the little dogs sent as gifts by the Dalai Lama to Chinese emperors are believed to be ancestors of the Shih Tzu. Historically, Chinese and the Tibetan lamas bred their dogs to resemble the lion so closely associated with Buddhism.