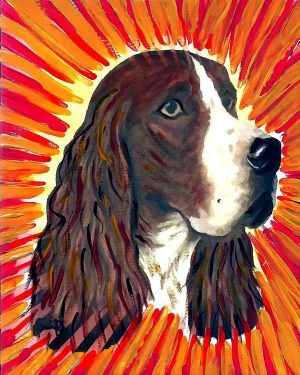 Over 500 words are devoted to describing an ideal English Springer Spaniel head, and for good reason. The Springer is a working dog, and while balance dictates that every part of the dog be soundly constructed, much of what a Springer does happens from the neck up. The Springer finds, flushes and retrieves, so they need their eyes, ears, nose and jaws to “let the games begin.”  The better constructed the head, the better the dog will see, scent, and mark.

To illustrate, read this line from the breed standard: “The nasal bone is straight, with no inclination downward toward the tip of the nose.” The nasal bone? Really?  A nasal bone matters? Yes, really. Possibly 30% of a Springer’s brain is dedicated to analyzing odor, so the structure of the Springer’s nose is important.  It’s made up of olfactory receptor cells, ethmo-turbinate bones that contain specialized olfactory epithelium, a rich supply of arteries, veins, and olfactory nerves that ultimately connect with the olfactory lobe in the dog’s brain. The combined functioning of these elements give the Springer Spaniel one of the best “noses in the business,” and is one reason the breed routinely appears on top ten lists of breeds with the best sense of smell.

As a hunting dog, the Springer needs jaws to be a sufficient length to carry game easily in her mouth, and this can be impacted by other proportions in the head, such as the back skull, and parallel planes of the skull and fore face. As a hunting dog, the Springer needs to be able to see well, so the placement of her eyes matter. You get the idea.

The original writers of breed standards may not have known why things like a nasal bone mattered to a dog like the Springer, but they pieced together that dogs successful in the field were built a certain way and wrote those elements into a standard.  Science has since explained the “how,” but we still rely on heritage breeders invested in their breed to produce these marvels.  We note that on the English Springer Spaniel website, the following passage appears:  “The English Springer Spaniel Field Trial Association, the parent club of the breed in the United States, was founded in 1924. In those days, dogs might emerge from a day of heavy field work to be presented in conformation competition the next day.”  And why not? A well built dog that can do the job for which it was bred is a thing of beauty.

English Springer Spaniel by Char Swift is available as a print, poster and greeting card here