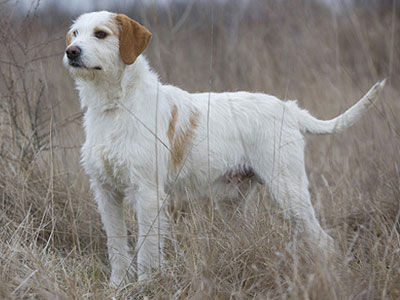 Introducing a youngster (or an adult, for that matter)  to the world of purebred dogs is to expose them to geography, languages and different cultures. It can’t be helped. With over eighty different countries claiming one or more native dog breeds (and more in the future likely to come as some landraces and local varieties become recognized as breeds), that number may grow.

We use Istria as Exhibit A. Can you find Istria on a map?

Travelers already know Istria as a popular destination point because of its olive groves and wineries, hills and palm trees, and of course, the seaside. Indeed, Istria is often referred to as an unspoiled Tuscany.

Istria is located close to Italy. It’s the largest peninsula in the Adriatic Sea and is shared between three countries, Croatia, Slovenia  and Italy. There are a number of breeds associated with Croatia including the Croatian Sheepdog, Old Croatian Sighthound, Posavac Hound, Tornjak, and, depending upon the source, the Dalmatian. For the purposes of this post, however, we focus on breeds that include the name, “Istria” in their name, and as the lion’s share of the peninsula is in Croatia, Istrian Hounds are considered Croatian breeds. Kind of. Slovenia still claims that the first Istrian Coarse-Haired Hound was bred in Slovenia and not Croatia.

The Istrian Coarse-haired Hound (also seen as the Istrian Wirehaired Hound) and the Istrian Shorthaired Hound (which came before the wirehaired) are believed to have descended from Asian sighthounds brought to the Balkans by Phoenicians. Other Croatian hunting dogs emerged as separate breeds in the 17th century, but a column found in a Franciscan monastery in Dubrovnik dated between 1327 and 1348 shows of four dogs of this type of this hound. A fresco painted in 1497 also depicts a dog similar in appearance to the Istrian Hound. Between those renderings and mentions in literature, it’s likely that the Istrian Hound is the oldest hound breed from the Balkans. 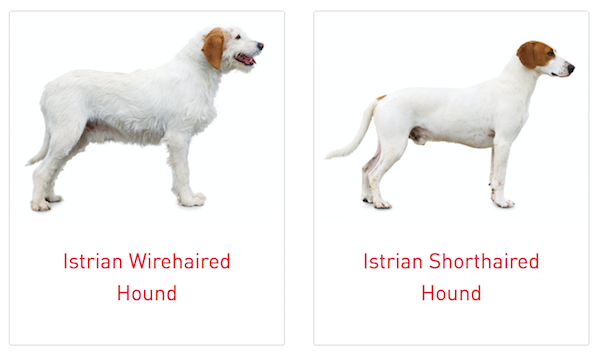 Like many old breeds, its history is largely undocumented, but it’s known that they were used to hunt foxes and rabbits for centuries. The Shorthaired is believed to have come before the wirehaired, but in the mid 19th century, it was crossed with the French Griffon Vendeen and offspring had the coarser, more wiry hair of the Griffon, but essentially the same size of the short-Haired. The wirehaired hound made its debut in the 1860s when one was entered at a conformation dog show in Vienna.

The dog didn’t set the world of fire. 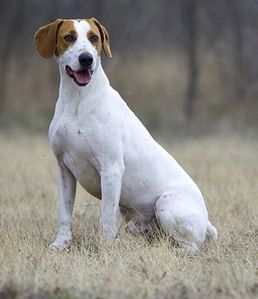 Not until B. Laska published descriptions of the breed in two books published in 1896 and 1905 did anyone take much notice.

A stud book established in 1924 helped maintain the breed until the FCI recognized it in 1949. The first breed standard was published in 1973 and that helped the breeds gain recognition in other countries.

Outside of Croatia and Slovenia, one is unlikely to run into either of the hounds, but in those countries, they’re popular hunting dogs valued for their courage, stamina, and the tenacity to follow prey for hours. Some describe their hunting technique as”melodious,” which is to say noisy. We’ve read that a common attribute is to rush enthusiastically after quarry – and bark the whole time, but hunters who like to know where their dog is don’t mind it at all.  At home, the dogs are calm, gentle and tolerant of most other dogs, but they are still a hound, and as such, as active.

**“Živjeli! is “cheers” in Croatian