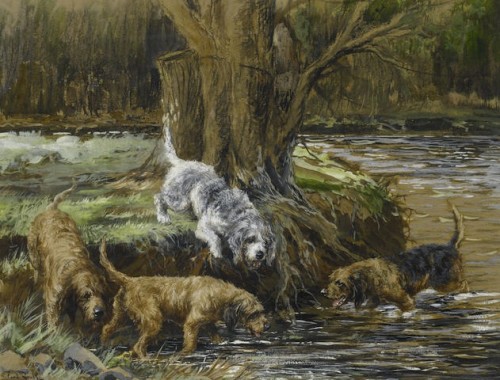 It was said that an Otterhound’s sense of smell was so acute, it could smell in the morning the fact that an otter that passed through the water the night before. Not surprisingly, this was a popular breed, then, used in packs to control otters that were competing with fishermen for the supply of fish in the 13th century. With their thick padded webbed feet, ears that would fold back to protect their ear canals, and oily double coat, they were superbly suited for the job.
King John kept a pack of Otterhounds for hunting and he was likely the first “Master of Otterhounds.” In all, ten British monarchs carried the title “Master of Otterhounds, Queen Elizabeth I becoming the first “Lady Master of Otterhounds.”
In the latter half of the 1800s, there were 18 to 20 Otterhound packs in use throughout Britain each season making this period the height of otter hunting. Squire Lomax of Clitheroe was said to be such a stickler for the tradition and formality of the hunt that HOW his hounds worked was more important than how many otters they caught. His famous pack in the late 1860s was so well trained that the dogs were said to take their instruction from him with only a slight wave of his hand. A few dogs from the major packs of those times were sent to larger bench dog show exhibitions, the Carlisle and Kendal working packs noted for their show winners. Purebred Dogs were “not just for show” even then.
Image: “Two Otterhounds Working at the Base of a Tree,” by Reuben Ward Binks (British, 1880–1950). Image appeared (courtesy of Bonhams) in an AKC GAZETTE article by Eibhlin Glennon entitled, “Instead of a Designer Breed, Consider the Undoodle.” Read the article here.