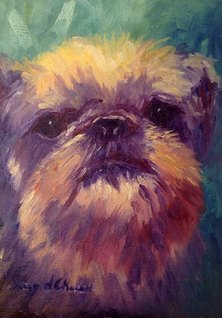 The Brussels Griffon is named for the city of his origin, Brussels, Belgium. As for his job – – in the early 1800’s, coachmen kept small Affenpinscher-like dogs known as Griffons d’Ecurie (or wire coated stable dogs) to be stable ratters. History doesn’t tell us why or when other breeds were introduced, but it’s thought that the Pug was bred to the native Belgian dog in the mid 1800s, and from this cross came a smooth coated Griffon called the “Brabancon” after the Belgian national anthem, La Brabonconne.

Around the same time, the King Charles and Ruby varieties of the English Toy Spaniel were crossed with the Belgian dogs, and from these two crossings came the harsh coated rough and the smooth coated Brabancon. These two short faced, large eyed breeds rendered the efficient ratter into a gem of a small companion dog with the characteristic “pout” that makes the Brussels Griffon’s expression seem almost human.