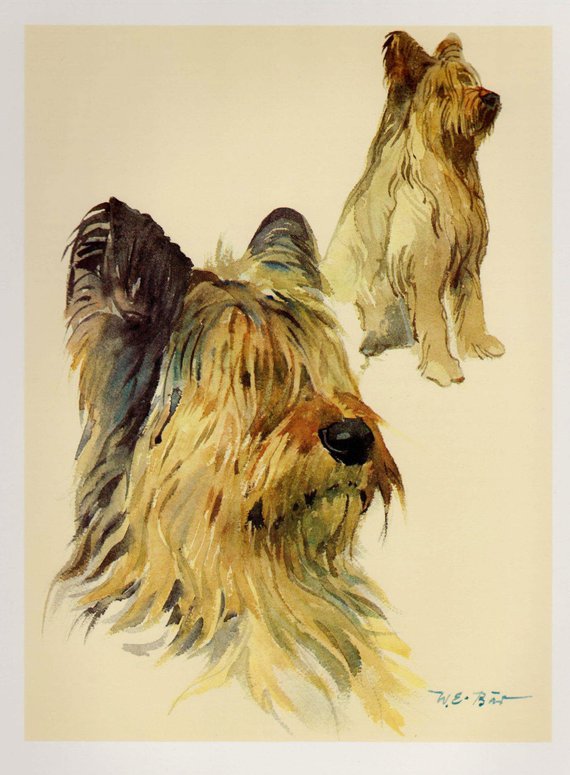 The word “Briard” was actually a surname. It was originally found in the region in north-eastern France, the name stemming from the medieval kingdom of Lotharingia. The Briard family, bumped up to nobility status back in 1622, held a family seat for the Marquis de Brie.

This is not, however, how the breed we know as the Briard came by its name, and therein lies the “meat” of this post. How did the Briard get its name?

For a long time, the breed was known as the Chiens de Berger français de Plaine, or French Lowlands Sheepdog. It wasn’t until 1809 that the name, “chien de Brie,” appeared, this occurring in the Abbot Abe Rozier’s “Complete Agricultural Course,” an article describing the differences between the long haired Berger de la Brie (what we know as the Briard),  and the shorter haired ‘Berger de la Beauce’ (or Beauceron, as we call the breed).  Presumably, the French priest’s associations with farmers in Brie influenced him.

However, another version is rooted in a legend dating to the Middle Ages.  A certain Sir Aubry de Montdidier was murdered, his dog the only witness.  As the story goes, the dog (resembling a Briard) followed the murderer every day and night. Ultimately, this was noticed, and the King ordained judiciary duel between the man named Richard de Macaire, and the dog. The duel occurred in 1371 on the Isle de Notre Dame, and the dog won.  As the “telephone game,” proves, the more people to whom something is told, the more it “morphs” over time. The dog known as “Chien d’Aubry” in the Middle Ages became ‘Chien de Brie’ through common usage.

As is the case with many old breeds, names come and go. Berger Briard, Chien d’Montargis, and Briard de Brie were the Briard’s other “aliases,” as well as “Emperor Charlemagne’s Dog”for his association with that ruler.

Support National Purebred Dog Day with a sweatshirt embroidered with a Briard. Get it here!