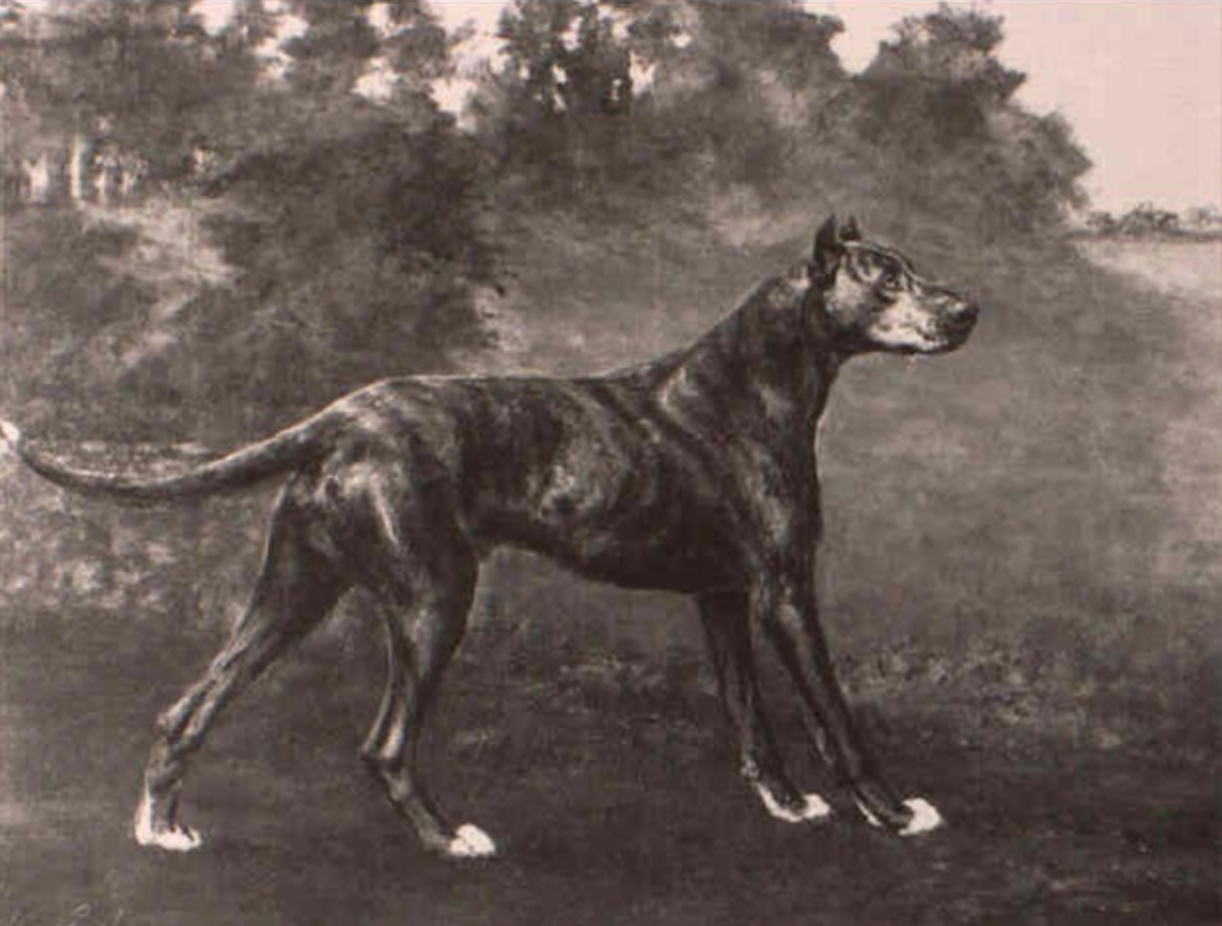 Long before written records were kept, the Great Dane was already a recognizable breed unto itself.

And that’s what we can say with certainty.  After that, the gap of knowledge about the breed’s origins is subject to speculation, hypothesis, and guesswork. It’s been generally accepted that the Great Dane isn’t Danish at all, but German, and its roots there as a boar hunter are hundreds of years old, perhaps even older. Some think the breed’s name was coined by the French naturalist, Georges-Louis Leclerc, Comte de Buffon who called the large dog, “le Grande Danois,” or Great Dane when he saw the breed while traveling in Denmark in the early 1700s and assumed it was a native breed of that country.  The name stuck.

Others maintain that the breed is very much Danish, and you can read up on the supportive argument here.  An interesting middle ground is that the breed did actually originate in Denmark, but when hunting styles changed to parforce hunting during the reign of King Frederik II, English dogs were imported (for which Queen Elizabeth was formally thanked), and bred to existing Danish Dog to produce the basis for the appearance and build of the dogs we now call Great Danes.

We came across an interesting comment made by Sarah Amalie Lerstrøm Margolin. To paraphrase, she shared that Otto von Bismarck renamed the breed “Reichhund” around 1878, and “Deutche dogge” was, by law, the only name of the breed in the new German confederation. Outside that confederation, however, the dog was still called the Great Dane or Grand Danois. Under Nazi control during WWII, the German dog society Reichsverband für das Deutsche Hundewesen tried to have the FCI rename the Great Dane to Deutche Dogge, but this failed. After the war, the Verband für das Deutsche Hundewesen (VDH), sent new standards for the breed to the FCI with no mention at all of the originating country, something against FCI regulations because standards could only come from the breed’s originating country, but somehow ended up on the books. In 1988 the VDH again sent in standards, this time with no mention of Denmark or even Great Dane, now instead naming it Deutche Dogge, a Deutche rasse. The Danske Kennel Klub (DKK) registered complaint with FCI, and the FCI upheld their previous decision in 2012 that the Great Dane is a Danish dog, although the standard has yet to be rectified.

The breed made its appearance at Germany’s first dog show in 1863, and its size, handsomeness and good temperament put it in high demand in England and especially the United States. A good number of Great Danes were exported, and it became among the earliest breeds to be granted recognition with AKC in 1887.  In 1899, the Great Dane Club of America was founded in Chicago, becoming one of the oldest breed specific clubs in the United States. Its popularity continued to grow, and in 1923, it was officially recognized by the United Kennel Club.  In 1965, the Great Dane was selected as the state dog of Pennsylvania, the only state dog that was not developed in the state where it received the honor.