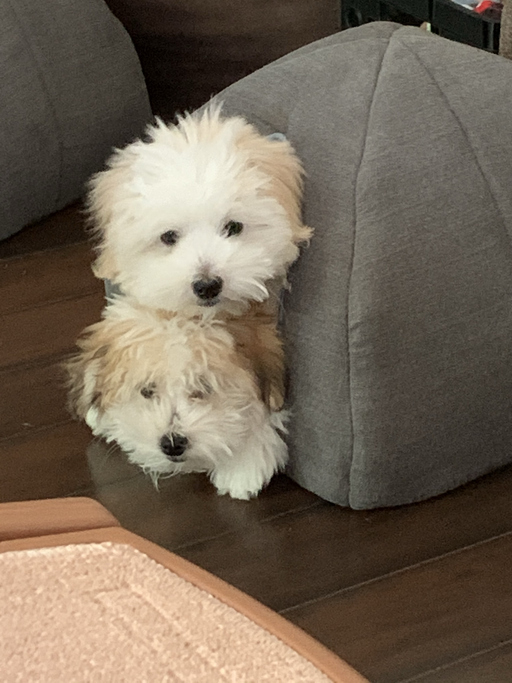 As legend has it, not long after a merchant vessel engaged in a furious battle with a pirate ship, a hellacious storm arose and sank both ships. There were no survivors save the little white dogs on board the cargo ship.  The shipwrecks weren’t far from a remote African island some 500 miles east of Madagascar, and the dogs swam to shore. There, they bred with local dogs, and offspring began to adapt through rigorous natural selection.

But they were not Cotons de Tulear.

They were the Coton’s ancestors, a now extinct dog known as the Coton de Reunion.

The shore these dogs had paddled to after the shipwreck was the island of Reunion which in the 17th century was settled by the French.  The Coton de Reunion became valued a possession and companion who accompanied merchants, officials, and even pirates on their voyages, and it is from that place that the Cotons were taken to Tenerife, and to the trading port of Tulear in the southwest of Madagascar.

When the Suez Canal was built in 1869, it essentially stopped commercial transportation via the Malagasy channel, and that reduced Reunion’s trade prominence. It lead to the eventual extinction of the Coton de Reunion, but by that point, the breed was in Madagascar where it became the basis of the modern Coton de Tuléar.

The more contemporary story of the Coton has the small dog appearing in Europe during the 1950’s. The Societe Canine de Madagascar (Malagasy Kennel Club) was created in 1966 by Louis Petit, and the dogs were initially registered as a breed in the country of origin with the Societe Canine de Madagascar in 1968. Not long after that, the Societe sought breed recognition from the FCI which recognized it in 1971 with the establishment of the first, original breed standard.

The Malagasy Kennel Club adhered to this early FCI standard, but that same year, another version of the FCI standard was adopted in Europe, the primary difference between the two having to do with coat color. The Malagasy Kennel Club’s published FCI Standard allowed for some coat color, specifically white with black markings. At the risk of going off topic, we add that the Coton de Tulear Club of America was formed in 1976 and used a somewhat different standard, but the FCI description of a Coton de Tulear remained the breed standard by which Cotons were judged at shows worldwide.  That original standard was revised four times to the current FCI Standard of 1999. It reads, “White. A few slight shadings of light grey colour (mixture of white and black hairs) or of red-roan (mixture of white and fawn hairs), are permitted on the ears. On the other parts of the body, such shadings can be tolerated, if they do not alter the general appearance of white coat. They are however not sought after.”