“A Dog of Flanders” is a tear jerker of a novel that tells the story of “Nello,” a young Flemish orphan living with his grandfather outside of Antwerp.  On their way home from delivering milk one day, the pair encounter a dog that’s been beaten nearly to death. The dog is taken home, nursed back to health, and named, “Patrasche.” He and Nello become inseparable. Loss, poverty, disappointment, cruelty, rejection and hardship weave throughout the plot, and then it really gets sad, but despite its despairing story, a Dog of Flanders has become a classic, particularly in Japan.
Written by English author, Marie Louise de la Ramée and published in 1872 under her pseudonym “Ouida,” the novel first became popular after a Japanese diplomat living in New York read about the book in the author’s obituary in 1908. He sent a few copies of the book back to Japan where it not only became one of the best-known children’s stories, but required reading for Japanese schoolchildren. Curiously, no one in Flanders knew the book until the first translation appeared in 1987.
When the Belgian Board of Tourism learned of the book’s phenomenal success (largely because Japanese tourists to Flanders kept asking where they could find the sites mentioned in the book), the Antwerp district of Hoboken decided to quickly erect a small statue honoring the story.  Japanese visitors complained that the figures didn’t look right to them. 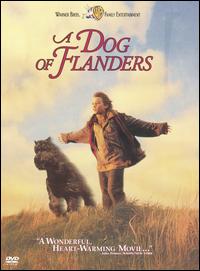 Two more monuments were built, one at the Kapelstraat in Hoboken, and the other, a commemorative plaque donated by Toyota and placed in front of the Antwerp Cathedral. The latter was eventually replaced by artist, Batist Vermeulen’s white marble statue of the two characters covered by a cobblestone blanket which you see here. This dog doesn’t suggest any particular breed, but of the five movies adapted from the book, the one filmed in Belgium in 1999 had “Patrasche” portrayed by a Bouvier des Flandres.