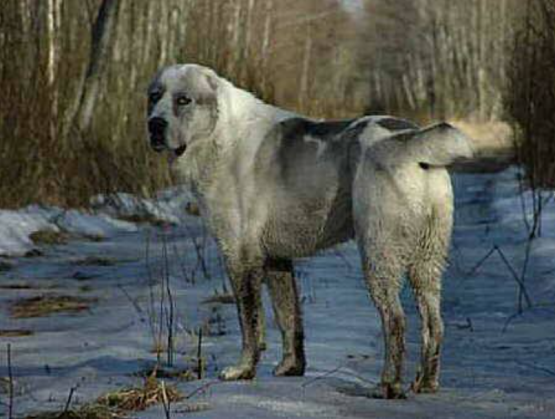 Unlike the Sage Koochi whose name sounds like a Burlesque handle, there’s no mistaking the Iranian Beardog’s name for an entertainer’s moniker. Also known as the Sage Mazandarani, the Beardog is one of Iran’s seven native dog breeds, and not a breed for a first time, or even second time dog owner.  The breed comes in two sizes, both strong, well boned, powerful and aggressive. The larger sized and more heavily coated dog (also known as the “mountain type”) was originally imported to Russia as a bear hunter, and indeed, is still used today to hunt that animal. The smaller Mazandarani (called the “plain type”) has a short coat, and is also leaner and lighter. These smaller versions are used to track and hunt big cats,  such as panthers and leopards.

The Sage Mazandarani is courageous, fearless, and highly territorial and protective. It does well with its family, but with strangers and other animals, not so much.

Found throughout Northern Iran where it originated some 4,000 years ago, the breed is believed to be a descendant of old Hyrcanian Mastiffs crossbred with local livestock guarding breeds. Most Sage Mazandaranis have cropped ears and tails, and the dogs come in a variety of colors, but most are typically white with dark patches. Rarely, one may see black and tan, or solid black dogs, and they are highly valued.

The breed is not recognized by AKC or any other major kennel club, but it has bred true for a millennia, and breed devotees have said that this is a dog with a soul to match its size.

Our image was found on forum uncredited, and we’re happy to give attribution upon receipt of information