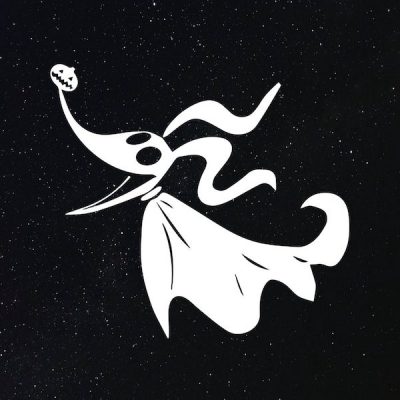 To get us in the mood for this post, scroll down for a musical refrain:

“Sally’s Song,” from the Tim Burton movie, “Nightmare Before Christmas,” is a personal favorite of ours for its haunting melody and expression of unrequited love. And yeah, Sally is dead,  so what?

It surprises a lot of people that the character of Sally was “voiced” by Catherine O’Hara who also sang “Sally’s Song.”  Dog people will know O’Hara for her part in “Best in Show” as seen in the clip below:

A younger audience may know O’Hara as “Moira Rose” from the Canadian TV sitcom, “Schitt$ Creek” where again she teamed up with Eugene Levy.

We return, however, to “Nightmare Before Christmas,” and its canine star, “Zero.” Zero is the main character’s ghost-dog (Jack),  but despite his ghostly form, he’s still all dog: His favorite activity is fetching the bones pulled from Jack’s skeletal body, but like a dog, he is also silent witness to is owner’s frustrations and grievances.

Theories abound as to Zero’s breed. With his slender, pointed face, long, floppy ears, and an elongated ghost body, most movie fans believe he is a Dachshund, though some has floated the idea of his being a Basset Hound.

It wasn’t the first time that Tim Burton cast a dog in one of his movies. The Bull Terrier, Frankenweenie, was inspired by the loss of Burton’s own dog when he was only 10-years-old, and “Scraps” appeared in, “The Corpse Bride” in 2005.   And who could forget (as if anyone could) the really disturbing Chihuahua, “Poppy” whose body was switched with his owner’s during horrifying alien experiments in the 1996 movie, Mars Attacks!

As we write, Halloween is but thirteen days away. In a year that by any account has been tumultuous, Halloween during a pandemic could be challenging. That said, people always find a way to rise to the occasion, even if it’s just to decorate the house or apartment. To that end, we came across a video showing how to make your own “Zero” decoration. The host in this You Tube video may be a bit uber-enthusiastic, but the end result is kind of cute.

We conclude the way we began with a reprisal of “Sally’s Song,” but in this version, we see Catherine O’Hara singing the part “in the flesh. The crowd noise dies down, just be patient: