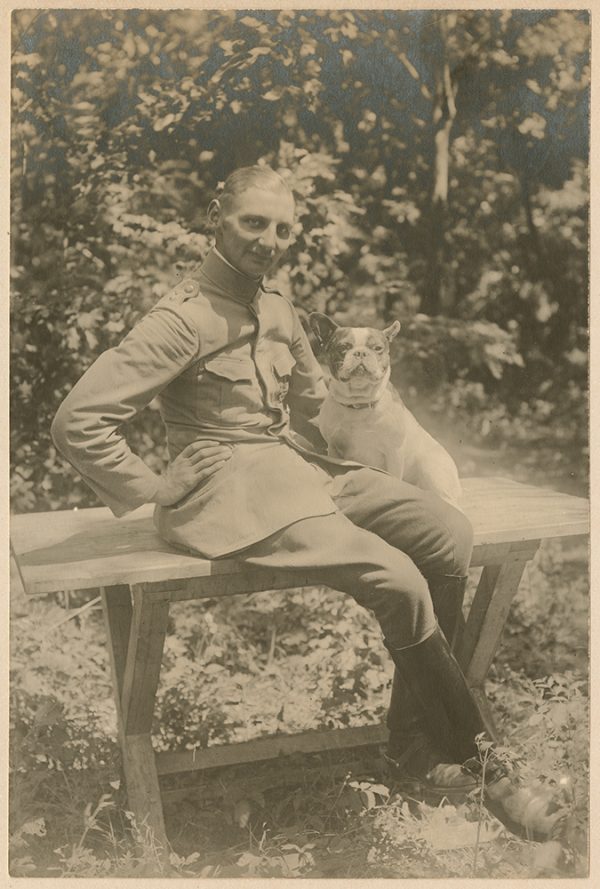 This is a photo of “Bobby” and his owner,  a member of Flight Squadron 27. The photo was taken in Yalta, Crimea around 1918. You’ll see Bobby again at the end.

We also came across the photo below of a woman with her French Bulldog taken as she decorated a grave at Dr. Buckingham’s pet cemetery in Washington, D.C. The picture was taken between 1916 and 1917, and if nothing else, it illustrates how little the breed has changed in the last one hundred years. 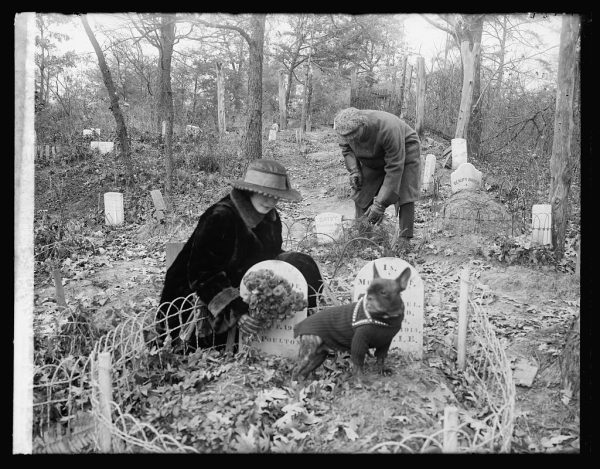 We got to wondering about the “state of the breed” in the time between 1914 and 1918, the World War I years, and that’s when we came across the video below. It’s an unusual vintage clip of a French Bulldog working on the frontline (western front) in France in 1917 during that Great War, and readers may be no less surprised than we were to learn that the breed was used in this capacity.  Such a stoic and brave little fellow, and one can’t help but wonder what became of him.

Sadly, we know what happened to “Ortino,” seen below with his mistress, Tatiana Romanov, and her brother, Alexei, in the Park at Tsarskoe Selo: 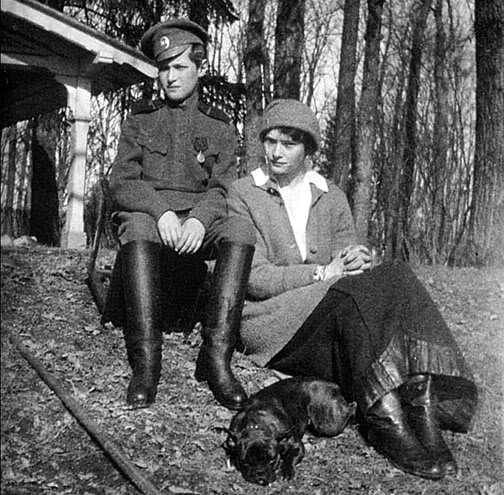 This work is in the public domain

Ortino was given as a gift to Tatiana Romanov by Officer Dmitri Yakovlevich Malama in 1914 (and, some say, who Tatiana’s mother, Alexandra, would have wanted as her a son-in-law). The Frenchie was Tatiana’s constant companion, the young lady rarely seen without the dog at her side.  In letters to her father, Tatiana mentioned Ortino’s playful nature writing, “My doggy Ortino was running about the room and playing during the teatime. It is so funny and sweet”, and “We are sitting in Mother’s room after dinner. Olga and Mother are playing “Colorito” and Ortino is running about the room like a mad dog”. Hardly a letter or diary entry fails to make some little mention of Ortino, and her words convey eloquently how much she treasured him. She described Ortino as snoring gently at her feet, and even patiently describing his occasional “accident.” Ortino inserted himself in Tatiana’s bed every night,  though he snored quite loudly, and Tatiana’s sister, Olga, with whom she shared a room complained about it. Another sister, Anastasia, also made note of it in her journal, writing “When we are asleep at night, all of us sisters are kept awake by Ortino, Tatiana’s French Bulldog, who snores. We have tried everything, but nothing works!”

The Romanovs were executed by Bolsheviks on June 16, 1918. One account of the assassinations says that when revolutionary soldiers went into the house after the entire family had been shot, a small French Bulldog defended the bodies and barked at the men in fury. A soldier stabbed the dog to death, then brought it outside and displayed it impaled on his bayonet drawing cheers from the crowd. Eventually, the little dog’s body was tossed into a pit containing the bodies of the rest of his family.

Another source offered a different version of events, but sadly, the same outcome.  Before he died in 1964, Mikhail Aleksandrovich Medvedev, a Russian revolutionary and participant in the execution of the Romanovs, testified in 1963 that as the bodies of the family were moved from the basement of the house to a truck, a little bulldog (presumably Ortino) appeared from the upstairs of the house. He rushed into the courtyard, very distressed and upset. As he picked up the scent of his people commingled with blood and gunsmoke, he reacted with a vicious fury. A soldier took up his bayonet and stabbed the dog to death, throwing his body into the truck with the Romanovs.  “A dog’s death to dogs,” he remembered someone saying.

In the late 1990’s,  the remains of the royal family were excavated from the mine shaft into which they had been flung after their executions. There, among their bones, were the remains of what was described as a ‘small terrier type dog’ and which were assumed to be those of Ortino. His bones were interred with the family’s remains with ceremony and respect in the family crypt in Moscow. Even in death, Ortino and Tatiana were not separated.

We end with another photo of the same dog who appears at the top, “Bobby.” The photo below is called “Bobby riding in a car” and was taken in the spring of 1918 in Kyiv city, Ukraine. 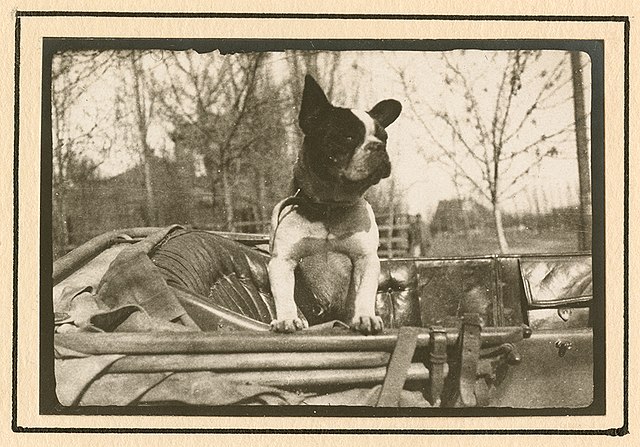 This photo is in the public domain and comes from Wikimedia Commons with a citation given to  DeGolyer Library, Southern Methodist University

Top photo comes from Wikimedia Commons with a citation given to DeGolyer Library, Southern Methodist University