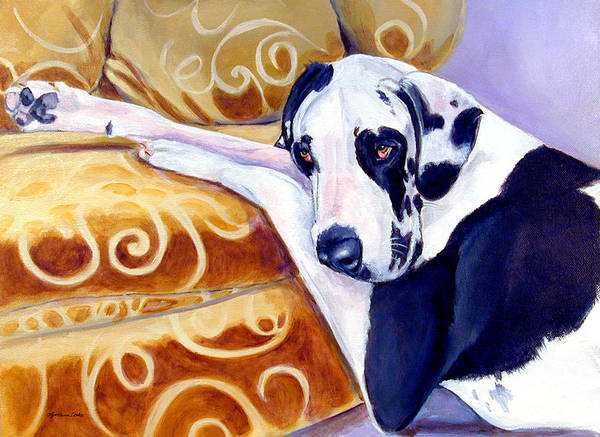 Great Danes have a talent for positioning themselves in ways that seem improbable for a dog that size (if you doubt us, check out “Hendrix”); if ever a breed could play the game, Twister, it would be this one.

Twister leads us to Chubby Checker. If you are of a certain age and remember that name, brace yourself: Chubby Checker is eighty-one years old now – and still touring!

For anyone drawing a blank on who Chubby Checker is, meet him the way the rest of us did back in 1961 when he appeared on The American Bandstand:

The simple dance move you just saw got the whole world “twisting,” from the White House and Buckingham Palace to school dances and local clubs. Pretty much everyone, regardless of their age or coordination, could do the Twist without embarrassing themselves – or even without getting out of a chair.  It was a multi-generational move in that kids, their parents, and their parents could do it.

Chubby Checker explained the Twist as being like “putting out a cigarette with both feet and coming out of a shower and wiping your bottom with a towel to the beat.” By 1965 alone,  Chubby Checker’s “Twist” sold over 15 million copies. In 2008, Billboard magazine named it the biggest chart hit of all time, this after looking at all singles that made the charts between 1958 and 2008. It became the only non-seasonal American recording to reach the top of “Billboard’s” pop charts twice, setting a record at the time as the only song to reach Number One in two different hit parade runs when it resurfaced and topped the popular hit parade again for two weeks starting on January 13, 1962. This wouldn’t happen for another song for nearly 59 years until December 2020 when Mariah Carey’s “All I Want for Christmas Is You” reached the summit after hitting the top in another separate chart run in December 2019.  In 2018, the recording was chosen as one of the first six songs honored by the Rock and Roll Hall of Fame in a “singles” category.

Before Chubby made “The Twist”, his street-corner harmony group was performing on Philadelphia streets. He signed with Cameo-Parkway Records in 1959 and recorded his version of Hank Ballard’s “The Twist”  which became popular on a Baltimore television dance show hosted by a local DJ Buddy Deane. Deane recommended the song to Dick Clark, host of the national American Bandstand,and that appearance is what you saw early on in this post.

The success wasn’t entirely a good thing in Chubby Checker’s mind. Born Ernest Evans, Chubby fretted that people would think he could only succeed with dance records. He once said, “… in a way, “The Twist” really ruined my life. I was on my way to becoming a big nightclub performer, and “The Twist” just wiped it out … It got so out of proportion. No one ever believes I have talent.”

Still, Chubby Checker (whose name is a parody of “Fats Domino”) emerged wealthy and now has an estimated net worth of $4 million.

We end where we started out, with the Great Dane. It was Chubby’s breed of choice.