And back in the day, no one paid much attention to them. They were unassuming farm dogs and all-around helpers mostly kept by simple people living in remote areas of Russia and Russian Siberia. Very little was written about them because it wasn’t thought that there was much to write about.

There is, and in the 1920s, some people came to realize it, hunters in particular. Laikas are ancient. There are hunting, herding, and sled Laikas, they’re well suited for extreme Northern climates, and there are several regional variances among them, often in the same country.

At the moment, the AKC recognizes the Yakutian Laika, while the FCI recognizes three Laika breeds: The West Siberian Laika, the East Siberian Laika and the Russian-European Laika.  There is a fourth, but it isn’t recognized by the FCI, and that is the Karelo-Finnish Laika. In 2006, the Finnish Kennel Club and the Russian Cynological Federation agreed to combine the Karelian-Finnish Laika and the Finnish Spitz as one breed under the breed standard of the Finnish Spitz.  Since both breeds were bred from similar native dog populations, the decision was made on the basis of expanding the genetic pool. 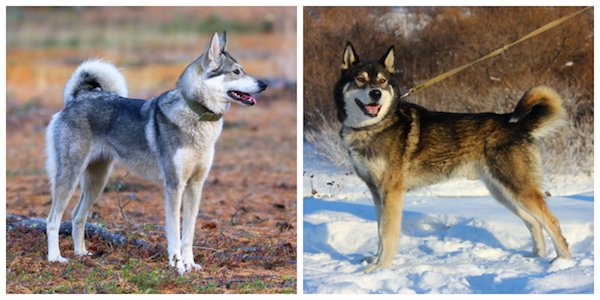 The inevitable question is: What’s the difference between them?

There aren’t any glaring ones, in part because a hunter cared far more for a dog’s ability than its exterior.  In fact, the two are quite phenotypically similar.  That said, there are subtle ones.

At a top average weight of 50 pounds, the East Siberian Laika is a bit larger than the West Siberian Laika by five to eight pounds (in fact, it is the largest of all hunting Laika breeds). It tends to be a bit taller than the WSL, and its doubt coat is straighter, thicker, and harsher than the WSL’s soft coat.  As compared to his eastern cousin, the Western Siberian Laika’s tail is strong and curly, and held high upon the dog’s back. The ESL is the calmest of the two, and of all the hunting Laikas, it is the quietest. What the two have in common is intelligence, resourcefulness, and a stubborn streak. Both are aloof and suspicious of strangers, both have a wolf-like appearance, both are square shaped, both have wedge shaped heads, and both are fast, agile breeds.

Cynologists suspects that because the ESL shares some traits with Chinese and Japanese dogs, its ancestors may have been interbred with dogs brought from China and Mongolia by migrating tribes.

Wildlife biologist, K. G. Abramov, set forth the first East Siberian Laika standard in 1947, a description based solely on hunting and sled pulling Laikas from the Amur River region who evolved from off-spring of Tungus, Yakut, pre-Baikal and pre-Amur Laikas. It was rewritten in the early 1960s, and in the 70s, systematic breeding began at government kennels in Irkutsk and in Leningrad.

The West Siberian Laika was developed through selective breeding of dogs coming from primitive hunting dogs of the Voguls and Ostyak indigenous people.  Though its breed standard was approved around 1930, the breed didn’t acquire the look it has today until after WWII.

The estimated Laika population in Russia is about 65,000 dogs, and between the two,  the West Siberian Laika is the more popular and numerous breed of the Russian Laikas.