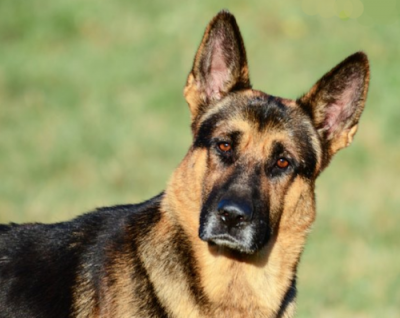 For a number of reasons, German is the most popular foreign language to use for dog commands. In part, this is because 85% of military and police working dogs are imported from Germany, the Czech Republic, and the Netherlands where dogs have been bred for such use for a very long time. Many of these dogs are worked in Schutzhund, and traditionally, German is the language spoken.

For a trained dog from one of the aforementioned countries to “hit the ground running” with a new partner, that partner needs to know at least some commands in the language used to train the dog.  It’s easier for a K-9 handler to learn a few German words than it is to retrain the dog with new commands.

This is changing – slowly.

A few years back, the Air Force Security Forces Center, the Army Veterinary Corps, the 341st Training Squadron, and other federal agencies including the Departments of Homeland Security, Defense, Justice and State started to combine their efforts to raise their own

dogs, and as of 2013, nearly 15 percent of all military dogs were bred in the USA, 10% of them bred at Lackland Air Force Base in San Antonio, Texas. In our view, we can do better, but that’s a topic for another post.

Another reason that many K9 handlers give commands in German (even if they don’t actually speak the language) is because most – not all, but most –  felons don’t understand it. Not understanding what a dog has been instructed to do is a definite disadvantage to a suspected bad guy. Plus, a suspect would have to not only know the German, but also whatever police code the handler is using.

German has a distinct tone and inflection that gets the attention of a dog pretty fast.  Many trainers outside of the military and law enforcement community have found that teaching a command in a foreign language – usually German – can be a great way to “start over” with a dog’s behavior, beginning from scratch, as it were to, to learn new commands without a dog’s old associations getting in the way.