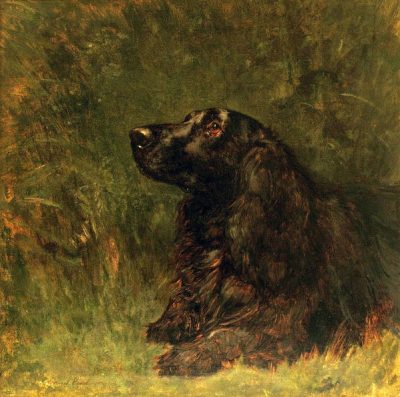 Apart from age, some of us prefer a breed with bells and whistles, so to speak – dogs that elevate the class of a room just by entering it. Others prefer a nuts and bolts dog with no pretenses. There are many breeds that fit that last description, but not a lot of them are coated. Meet the Field Spaniel, a coated breed that is the epitome of a basic spaniel without exaggeration.

It wasn’t always that way.

In the mid 19th century, vagaries of popular trends nearly ruined the breed. Heads became large, the body was elongated into what some called a “hammock slung” body with short crooked legs. That was the kind description. Less flattering, if not alarming, were words like “caterpillar” (needing an extra pair of legs in the middle to keep the dog’s stomach off the ground), “sausage,” and “sluggish.” Some breed historians pointed the finger of blame at a Field Spaniel fancier named Phineas Bullock who got his dogs from Sir Frances Burdett, the secretary of the Birmingham Kennel Club. We saw a lot of different breeds mentioned when referring to how he manipulated the Field Spaniel into a shorter legged, longer, heavier bodied dog, but mercifully, another Englishman, Mortimer Smith, brought the Field Spaniel back to its former appearance and working abilities before the breed vanished because of disgust with what had happened to it. By the end of the 1800s, the Field Spaniel was once again a sensible breed.

The breed has had its trials, including numbers so small following two world wars that champion status with withdrawn, and when a show was held in 1967 in Birmingham, every Field Spaniel in the country was on the bench. Things weren’t much better in America. From 1942 until 1967, there was no Field Spaniel in the AKC’s registry even though it was one of the first breeds to be shown and registered in America, their presence in a show ring predating the founding of the AKC in 1884.

Numbers did slowly grow in England, and challenge certificates were restored in 1969, but consider that in 2020, the Kennel Club in England registered only 69 dogs. Needless to say, this puts the breed on the Vulnerable Breeds list as these are not sustainable numbers.

It shouldn’t happen to a dog, as they say, but it’s mystifying why the Field Spaniel would struggle in its country of origin. Field Spaniels haven’t split into “field” and “show” types, so a hunter in a family can have a working dog while the family fancier can go to dog shows and be competitive. In fact, the vast majority of Field Spaniels running in spaniel hunt tests are also conformation champions.

This happy, level headed breed is, simply put, fabulous. One hopes that when considering their next dog, more people will give the Field Spaniel a serious look.