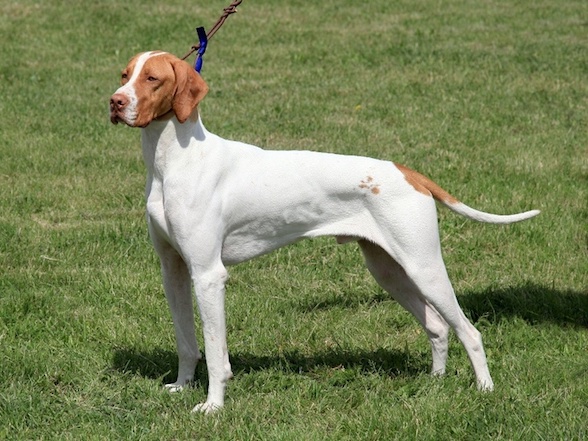 Several breeds include the word, “braque” in their names, including the Braque Saint-Germain, Braque d’Auvergne, Braque de l’Ariege, Braque Du Bourbonnais, Braque du Puy, and the Braque Francais Gascogne. If you know that the word “braque” comes from the French, “braquer,” and means “to aim,” then you instantly know that the aforementioned breeds are all dogs that point or set themselves in the direction of game. In short, they are sporting breeds.

One of the “braque” breeds we’ve not discussed much before on these pages is the Braque Saint-Germain, also known as the Saint-Germain Setter/Pointer or Compiègne Setter.  To say that the breed was created in the first quarter of the 19th century by crossing English and French pointing type dogs is to skip over the interesting details that bring history alive. In fact, an English Pointer named, “Miss” owned by King Charles X of France once “honeymooned” with a French Setter named “Zamor,” and together they produced seven wiggly puppies. Four of them were given to the Compiègne forest wardens (the woodland later to be the site of the Armistice between the Allies and Germany which ended World War I in 1918), and when some of the wardens were transferred to Saint-Germain (now the western suburbs of Paris and the source of the breed’s name), they took their dogs with them. This is how hunters became aware of – and then smitten – with these strong hunters. The Braque Saint-Germain became the most popular pointing breed in the 1863 French dog show, and was equally a hit with hunters. Years later in his marvelous book, “Pointing Dogs: The Continentals,” author Craig Koshyk describes the Braque Saint Germain as “the fastest and widest ranging of all the Continentals.” He adds that the breed has the nose of an English Pointer, the strength of a Braque Francais, and a character that’s an ideal blend of the two.

Sadly, the breed has had a roller coaster ride throughout history in terms of popularity, world wars, breed club struggles, and serious breeding programs. Presently, almost all the dogs are bred in France, an average of about 80-90 pups a year, but there are too few people breeding the dogs with serious intent, and the result is that there are too few dogs being seen at shows or in the field. One can only shake one’s head and think, “they’re missing the boat,” given the natural talent of a well bred Braque Saint-Germain. Soft mouthed with strong pointing instincts and a lot of drive, these dogs are natural backers, which is to say they honor the point of their brace mates. They resemble Pointers, though there is a less defined stop in their heads, their coats are thicker, the ears are longer and most have a softer expression.

A French breed club was created in March, 1913 (though we don’t know if its the same club that is currently active, and which has this Facebook page – worth visiting for its marvelous photographs.  In 2003, the breed was accepted by the FCI, and three years later, the United Kennel Club followed suit.