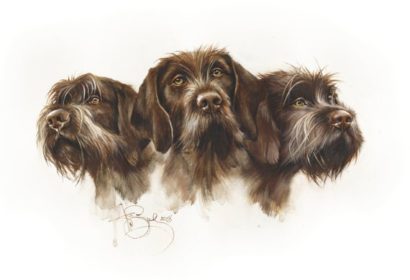 The Pudelpointer may sound like the latest incarnation of a designer breed, but it is, in fact, not only a purebred dog listed on the AKC’s FSS list, it’s a breed that’s over 120 years old. As the name suggests, the Pudelpointer started out as a blend between a Poodle and a Pointer (more about that can be read here), the idea being to combine the outstanding working abilities of two great specialists into one dog. It would have the Poodle’s intelligence, love of water, protective coat, retrieving ability and eagerness to please, with the Pointer’s birdiness, nose, endurance and drive to hunt.

By 1897, creator, von Zedlitz, felt his Pudelpointer needed more Pointer, and it was added until the breed was about three-quarter Pointer to one Poodle (only 11 Poodles were used to well over 80 Pointers in the first 30 years of breeding). Evidently, Poodle genes were prepotent (highly dominant) because after the first cross, no Poodle was ever introduced again.  Neither could more Pointer blood be added without Pudelpointer club permission, and a three generation waiting period had to pass before eventual offspring could be registered, and even then, only when the pre-approved parents produced dogs that could qualify in working trials.

As of the early 1970s, registration of a dog was postponed until hair quality could be assessed, around three months of age, and breeders waiting to register their puppy by even one month had to pay double the fee. There was no “this for that” mind set among breeders, which is to day that it was unacceptable to think that because a dog was strong in one regard, it would make up for weakness in another area. The Pudelpointer Verein Breed Book of 1960 wrote, “This [thinking] only drives undesirable characteristics underground to the hurt of future generations. Only he who uses the best stock need expect success. He who uses faulty stock disgraces his breed, ruins what earlier breeders have handed down to him.”

1.) From the beginning, breeding was done exclusively based on performance.

There was probably no other Breed where so many of the dogs used as breeding stock were selected based on test results. Until 1911, 40% of all the dogs listed in the breed book had run in Hunt Tests, and were thus registered into the Breeding Register.

Breeders stuck to the original breeding material created from the first pointer back-crossings. This protected the breed from single breeder ambitions, and made it possible for later additions of Pointer blood, three generations later, and under the strictest controls.

3.) Breeders stayed true to the intensive and proven measures of nature, and to the recognition of pedigrees and Mother-lines as a discipline in forming their breeding programs.

Pudelpointer breeders have felt that through strict breeding guidelines, their puppies are reliable hunters in all kinds of terrain and climate on many different kinds of game. Indeed, the Pudelpointer Club of North America presently states, ” The club’s breeding program takes great care to maintain the never ending desire to work on land or in the water, before and after the shot, and to find, point and retrieve whatever game is hunted.”

To read the rules and regulations for ability guidelines, click here. Don’t be surprised if your eyebrows shoot up. An uncompromising past has produced what some call the perfect hunting dog.

Image: “Pudelpointers” in watercolor from the series “Hunting dogs” by Valery Siurha may be purchased here.