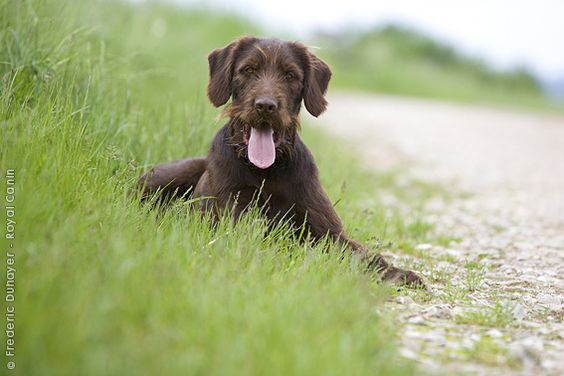 The dog may look like a German Wirehaired Pointer or Wirehaired Pointing Griffon, but the Pudelpointer is neither. The breed was born in Germany in 1881 when Baron Von Zedlitz crossed Kaiser Frederick III’s English Pointer, “Tell,” with a German Hunting Pudel bitch named, “Molly,” owned by a famous Teutonic author on the subject of hunting dogs.  The idea came at a time when versatile gun dogs were developed for people who hunted waterfowl, upland, and furred game, but could only afford one dog.  The goal was to come up with the quintessential hunting dog: Intelligent, obedient, water-crazy and driven to retrieve, all in the protective Poodle coat. During the first 30 years, 90 Pointers and 11 Pudels were used to refine and maintain the breed (though there are some who maintain that the Poodles used were really Barbet).

Pudelpointers figure prominently in today’s NAVHDA utility tests, and in Germany, a Pudelpointer dog or bitch won’t be approved for breeding until the dog passes performance tests set by various breed clubs such as the Verein Pudelpointer in Germany, and the NAPPA, PCNA and VPP-GNA in North America.

Image of a Pudelpointer via Pinterest via Royal Canin Canada

One thought on “The Pudelpointer”