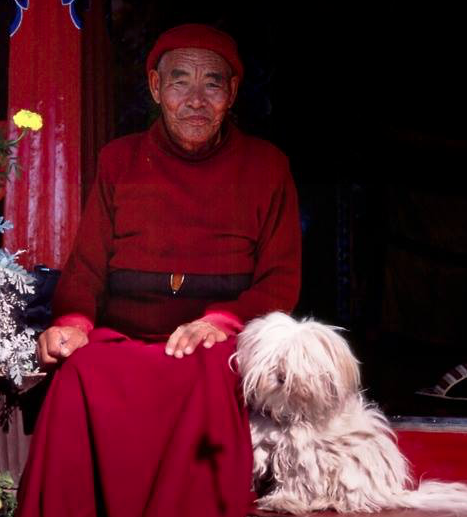 Its Tibetan name is Tsang Apso which roughly translates to “shaggy or bearded dog, but for at least 2,000 years, the monks who lived with Tibetan Terriers also referred to them as “the little people,” so valued were these dogs as companions. In reality, these dogs were more than company. They were working dogs which herded, protected, alerted, and even retrieved items that fell off monastery walls or mountain sides.

The breed’s origins are uncertain before it appeared in Tibet. Some believe the breed is a descendent of a dog that traveled with the Cuman people, a turkic speaking people that originated in western China near Tibet but fled invading Mongols. Others think the breed comes from the “Lost Valley” that became isolated as the result of a violent earthquake around 1300. Heads of Monasteries that visited the valley before the destruction took place were given a Tibetan Terrier as a good luck token that would carry peace and prosperity to their monasteries.

The Tibetan Terrier was introduced in the West by a British surgeon, Dr. Agnes Greig working in Tibet. She’d been gifted a puppy of her choice out of a pregnant Tibetan Terrier by a family grateful for a successful surgery on a family member in 1922 (known as the “Holy Dogs of Tibet,” TTs were never sold but only given as gifts). Dr. Greig selected a bitch she named ‘Bunti.” Since she already showed dogs and horses in India, she knew a bit about how such things worked and successfully got the breed recognized by the Indian Kennel Club which changed the breed’s name from “Lhasa Terrier” to “Tibetan Terrier” (and please know that this is the very short version; the reality was a bit more involved). Sources differ on when Dr. Greig returned to England, but by the early 1930’s, she was there with her dogs. The British Kennel Club followed the lead of the India Kennel Club and in February 1931, the first registration of Tibetan Terriers appeared in the Kennel Gazette Breed Records. The Tibetan Breeds Association was formed in England and efforts were made to encourage breeding within a ‘fixed’ standard of points. Though Dr. Greig was instrumental in the getting Kennel Club recognition for the breed, she was vehemently opposed to ‘glamorizing” a breed she considered to be a working dog with a short rugged coat.

A Tibetan Terrier Club in the UK was formed in 1956, and the first “official” Tibetan Terrier in the United States was “Gremlin Cortina,” who’d been imported in 1956 by Dr. and Mrs. Henry Murphy of Great Falls, Virginia. In 1973, the breed was recognized by the American Kennel Club and became part of the non-sporting group.

Image of a Tibetan Terrier with a monk high in the Himalayas. Found on Pinterest and happily credited upon receipt of information.