The sighthound known as the Peruvian Inca Orchid is also known as the Peruvian Hairless Dog, but there is a coated version of this breed that can be born in the same litter and differs only in that the ears are semi-prick when the dog is attentive, and laid back when relaxed. This coated version is an extremely important part of the breed’s genetic makeup, and as it happens, may help scientists learn more about a human malady. First things first. 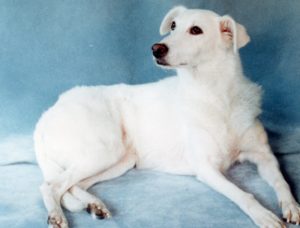 In this breed, hairlessness is determined by two versions of a specific gene: One version produces hairless dogs, and one version  produces haired dogs. The trait is dominant, so any dog with even one copy of the hairless gene will be hairless.  The trait, however, is also homozygous-fatal, and that means that any puppy with two copies of the hairless gene will die in the womb.  Because of this, all hairless PIOs have one hairless gene and one haired gene (put another way, they’re heterozygous). Until the laws of inheritance change (like, never), it’s impossible to eliminate the haired version from the breed even if breeders wanted to. Two hairless Peruvian Inca Orchids bred together will end in a quarter of all their puppies dying prenatally. Half their puppies will be hairless, and the other quarter will have hair. In the end, the ratio of surviving dogs will never be greater than two hairless puppies for every one haired pup.

Some breeders insist that it’s important to breed haired and hairless dogs together every few generations to lessen the degree of issues in hairless dogs, i.e., dentition, while other breeders maintain that such crosses aren’t necessary. We leave that discussion to the breeders, but we do want to point out that studying purebred dogs often leads to advances in human medicine. Ectodermal dysplasia is a group of genetic disorders affecting the development or function of the teeth, hair, nails and sweat glands in humans. People effected by ED have missing or malformed of teeth, very sparse hair, and other issues that can lead to a life of misery. Studying the hairless/hair mutations in the POI gives scientists a better understanding of the condition in people which may ultimately lead to better treatment, a cure, or even how to prevent ectodermal dysplasia in the first place. So while dog is man’s best friend, the study of dog breeds often makes the purebred dog a scientist’s best ally in curing certain human diseases.

Thumbnail image from the AKC with consent. Coated POI image found on Pinterest and happily credited upon receipt of information