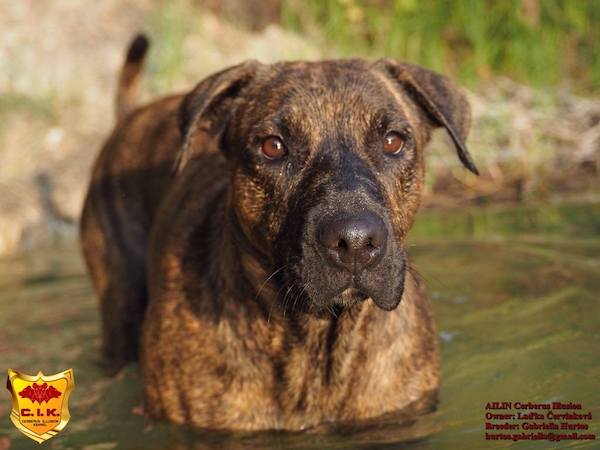 It is rare for us to start a Purebred of Interest feature with a history of the featured breed, but Uruguay’s only recognized native breed is unknown to many people outside of Uruguay, and we thought it might be helpful to share a little something about the history of the breed we’ll be learning about today.

The Cimarron Uruguayo is a very old breed. It was developed hundreds of years before breeders kept written records, and descended from dogs imported to Uruguay by European colonists, and Spanish and Portuguese conquerors. Dogs abandoned in the country when their previous masters left Uruguay bred among themselves and became feral, but with ample food and no known predators, their population grew.

Known for ferocity, the dogs became a real problem when they started killing sheep and cattle, and threatened people.  In the late 1700s,  authorities encouraged, and indeed, ordered the mass killing of these dogs, and tens of thousand dogs were slaughtered. The breed survived, however, because mothers took their puppies into caves and woodlands near the Oliver River and in the Otazo Hills. Only the fittest, strongest and smartest dogs pulled through this near extinction.

In time, it dawned on ranchers and farmers that these dogs could be domesticated and actually serve a purpose. The hunting and killing stopped, the dogs were captured and tamed, and a fabulous new helper was discovered. The dogs became fantastic guard dogs, indispensable as hunting dogs and cattle herders.

José Gervasio Artigas, a national hero of Uruguay and sometimes called “the father of Uruguayan nationhood” for having fought for independence from Spain once wrote to General Carlos Federico Lecor the following: “When I run out of soldiers, I will fight with the Cimarrón dogs.” The phrase has come to stand for independence and loyalty.

In 1969, the Cimarrón was first exhibited a Uruguayan Kennel Club dog show. In 1989, the breed was recognized by the Asociación Rural del Uruguay, and by the Kennel Club Uruguayo. When the FCI recognized the breed on a provisional basis in 2006 (and by the United Kennel Club the same year), it was given the official name “Cimarron Uruguayo,” after having been known as the Cimarron Creole in its native land (“Cimarron” literally meaning wild or untamed). This outstanding guard and working farm dog is now the most sought after dog breed in Uruguay, and is so popular that even the current president of Uruguay,  Tabare Vasquez, has one. It was honored with a stamp issued in 1995, and is currently the mascot of the National Army of Uruguay.