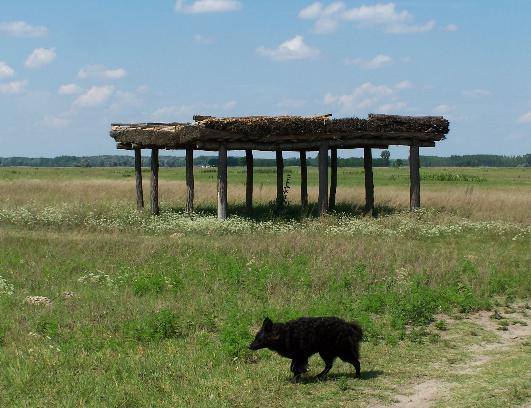 Like all Hungarian breeds, the Mudi‘s history has been largely lost to wars and occupations. It’s known that Magyarok (Hungarians) kept sheepdogs from the end of the ninth century, but records of breeding and pedigrees were a fairly “modern” device that started only in the second half of the 19th century. Before then, Hungarian sheepdogs were classified as “large” and “small,” and it’s early history is intertwined with that of the Pumi and the Puli.

As a breed, the Mudi was probably in existence somewhere between the 15th to 18th Century. Some experts opine that the breed was the result of crosses between spitz-type dogs and other naturally occurring herding dogs of the area at the time, and this might explain the prick ears and head shape. Some believe the Mudi to be the oldest of the Hungarian Sheepdogs, dogs that in antiquity, were found in the lowlands of Pannonia, now parts of Hungary, Austria and former Yugoslavia.

In the early 20th century, Dr. Emil Raitsits, hugely influential in Hungarian sheepdogs, sought good examples of them, but gave short shrift to the Mudi as he seemed primarily interested in Pulil and Pumik. Only in the 1930s did someone become interested in the Mudi, the same person who gave it its name separate from its Latin name of Canis ovilis Fényesi. That person was Dr. Deszö Fényes, director of the museum in Balassagyarmat. He recognized quite easily that the dog the Hungarian shepherds simply referred to as the “driver dog” was a homogenous and stable breed. He was one of the first breeders to become involved in separate breeding of the Mudi.

The sad fate of Hungarian dog breeds was their near annihilation during the war, and the Mudi wasn’t immune. Defending their property, the dogs were shot on sight. Their numbers would only return to healthier numbers in the 60s when a breed standard was written and FCI recognition came in 1966. Still, very few people were involved in the breed. Even other Hungarian breed owners outside of Hungary considered the Mudi to be a bit of a mystery breed.

Over time, and especially with the Internet, the world grew smaller. Though most Mudik live on farms in Hungary, and very litters are registered, word has spread of this multi-functional breed that herds, guards, exterminates and tracks. Since the ‘70s, a few dogs have been exported to Sweden and to Finland, and in the Netherlands, there are approximately 70 Mudik. Worldwide, it’s thought that Mudik number from around 1,500-1,750 dogs.

Today, there are several breed clubs outside of Hungary: In Canada, the Czech Republic, Sweden and Finland. The Mudi Club of America was founded in 2004 and at this writing, it is an FSS breed with the AKC.

Image: A Mudi strolling past a shelter on the Bugac puszta (plain) uploaded onto Wikicommons in 2007.