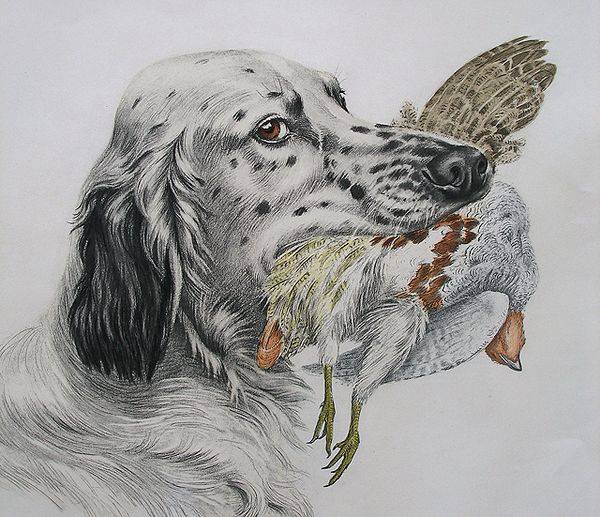 English Setters, classically beautiful dogs, are almost always born white, and as adults, have colored markings or ticking in a pattern known as Belton, so named for the village where the breed’s founder, Edward Laverack, liked to hunt. ESs can be orange belton, blue belton, tricolor belton (that’s a blue belton and tan), lemon belton and liver belton.

Though we’ve heard some owners refer to their dog as a “Belton-Type Setter,” technically speaking, belton is a color. We’ve also come across references to “Llewellin Setters” which some regard as a setter bred solely for field work. On this, we defer to the breed experts, but Llewellins also have belton coloring, as well as non-Belton coloring  – predominantly white with colored body  ticking –  and “blanketed” coloring, a predominant body color other than white.

Finally, we’ve read that in the early part of the last century, the term “Dual Setter” came from the fact that many Laverack English Setters were used for both Show and Field. We’re hoping a stalwart English Setter person can confirm this.

All that said, we’re asking for English Setter owners to share pictures of their dogs along with an indication of the dog’s color so that we can all learn!
Image: “English Setter and Partridge” by Danchin Leon (1887 – 1939)