It may seem like every college mascot is a Bulldog, but there are other breeds representing institutions of higher learning, and the Saint Bernard is one of them. Both Siena College and Emmanuel College have a Saint Bernard as their mascot, Emmanuel’s named “Halo,” while Siena’s is named “Bernie.” 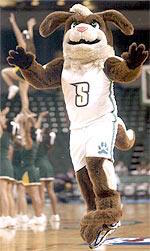 Siena College is an independent Roman Catholic liberal arts college in Loudonville, NY founded by the Order of Friars Minor in 1937. Named after Saint Bernardino of Siena, a 15th-century Italian Franciscan friar and preacher, it makes sense that a St.Bernard would be the school symbol. The “human” form of Bernie burst onto the scene in 1989, and with his mischievous antics and impromptu comedy, Bernie has become a highly popular personality in the mascot world. 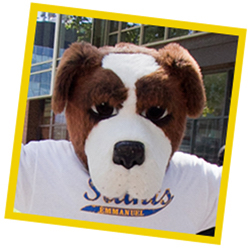 Emmanuel College in Boston is also a Roman Catholic liberal arts school, and was the first women’s college in all of New England in 1919 (today it is co-ed). Founded by the Sisters of Notre Dame de Namur, the school’s mission is tenacity and commitment to social justice. Since the Saint Bernard was originally bred to rescue stranded travelers in treacherous conditions, the school identified with the breed’s history of great energy, strength and dedication. As Emmanuel writes on its website, “We are the SAINTS!”

2 thoughts on “The Saint Bernard Mascot”