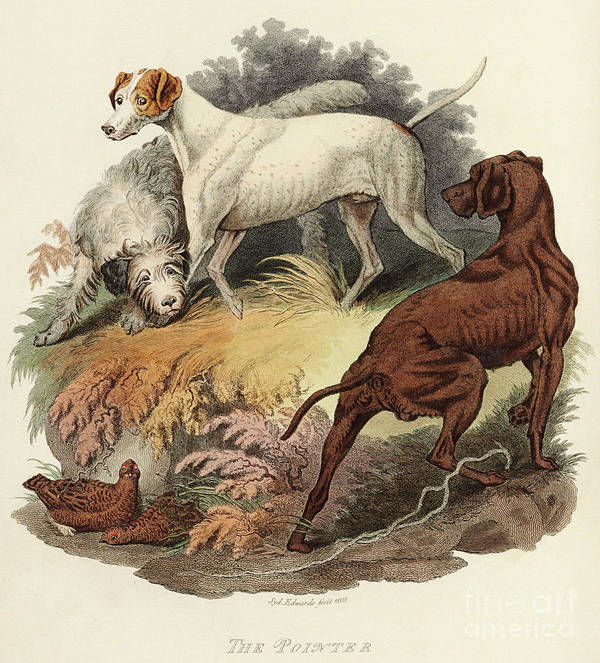 We’ll never know how many fans of purebred dogs were inspired by a book. For us, it was The Big Book of Dogs illustrated by Percy Leason and published in 1952.  It has since been reprinted, and we wonder if other children will “dog ear” the pages from constant use as we did starting at the age of five.

Illustrated dog books are not just for kids, of course. In 1801, the first part of Cynographia Britannica was published, a compilation of twenty-three dog breeds as they were at the opening of the nineteenth century in Great Britain. Each breed was named, written of, and illustrated by Sydenham Teast Edwards, a natural history illustrator of plants and birds who created engraving plates at a prodigious rate: Between 1787 and 1815, he had produced over 1,700 watercolors for Botanical Magazine alone.

As for the illustrated book on dogs, it was published in 6 numbered parts, the last plate dated 1805. The final text meant to accompany the engraving of the Setter, however, was never printed for reasons unknown to us. Though Edwards didn’t specialize in dogs, his importance as a chronicler of early breeds can’t be overstated. To his credit, he avoided the conventional renderings of dogs, and instead arranged his subjects in carefully balanced groups in the manner of a vignette. Why Cynographia Britannica is especially important is because it was the very first book on dogs that included illustrated accurate color plates of breeds identified by name.

Today we may find the illustrations a bit dated, which is to say highly stylized, but the plates conveyed size, color, and scale, and were some the earliest depictions of certain breeds. The artwork was originally painted by Edwards as watercolors, then reproduced as hand colored plates in installments for the book which was executed some seventy years before the founding of The Kennel Club. 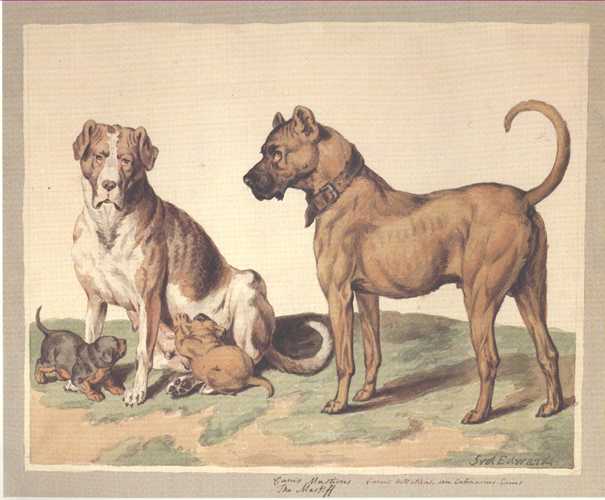 Today, the book is very rare. According to ABPC (American Book Prices Current) and RBH (Rare Book Hub), only two complete copies have appeared in the last 50 years. In 2018, a representation copy of the first edition from the estate of Celeste Winans Hutton sold at auction for $17,500. We strongly encourage giving illustrated books of dog breeds to young children, just not this one.

Images are from the Cynographia Britannica