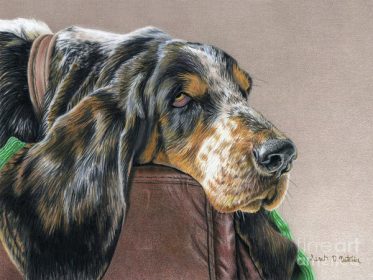 A group of solemn men, each dressed in a black mourning coat, hip boots, and wearing carbide lamp on their head, stood beside a mound of soil and a freshly dug hole. A hunting horn sounded, and the bay of hounds filled the air. Four similarly dressed men walked slowly toward the gathered crowd, a small wooden box carried between them. When the box was lowered into the ground one of the men spoke the following:

“Let not your hearts be troubled,
for in his master’s swamp are many den trees.
If it were not so, I would have told you.
He has gone to prepare a place for you
and where he has gone Ole Red will go also.
Dogs, they say, do not have souls.
They only have hide and bones.
But I believe there is a coon dog heaven
and Red is gone were the good coon dogs go.
Anybody that coon hunts has to believe in God.
If you have known the music of coon hounds on a trail
and heard the excitement in their voices when they strike,
and seen their eagerness and determination when they tree,
if you have seen their courage and bravery
in a tough fight with an old boar coon,
if you have heard their anguished cries and howls,
if you have seen the ugly gashes
and bleeding wounds
and witnessed their resolve to never quit,
you know there has to be a God to make an animal like that.
And a God that that would make a coon dog
won’t forget him when he is gone.
There is a coon dog heaven and Ole Red is there.
And every night he runs
and the den trees are there in the old swamp
and the old hunter’s moon hangs low in the west
and the coons don’t go up no slick barked trees
and the carbide don’t run out
and there ain’t no bull nettle and saw briars
and old master always knocks the coon out
and lets Ole Red grab him and give him a good shake;
and then he gets a pat on the head
and climbs back into the kennel in the back of the pick-up truck
and goes home and sleeps all day.
‘Cause he knows in coon dog heaven he can hunt again
when the sun goes down and the tree frogs holler.
May the bones of Ole Red rest in peace,
through the mercy of God
and may the coon hunters light perpetually shine upon him.”

It’s a scene that has played out many a time at the only burial ground in the world intended exclusively for coonhounds. It is, not surprisingly, called the Coon Dog Cemetery, a piece of geography one enters by passing by a statue of two coonhounds treeing a raccoon. The former campground located rural Colbert County, Alabama was established in 1937 by Key Underwood after he lost his coonhound, “Troop.” Underwood didn’t set out to create a unique cemetery. He simply wanted to buy Troop in one of the dog’s favorite places, and it was in that spot where an old chimney stone came to mark Troop’s grave.  It was after other hunters buried their dogs there, as well, that the area began to take on the form of a cemetery.

As of 2014,  more than 300 coonhounds have been laid to rest in the graveyard, each having had to meet three requirements to qualify for burial at the cemetery: The dog’s owner must verify that their dog was a purebred coonhound, a witness must declare that the deceased is a coon dog, and a member of the local coon hunters’ organization must be allowed to view the remains for verification. Friends of the Coon Dog Cemetery maintain, restore, and preserve the grounds for future generations. Though the video below repeats some of what we’ve shared, it does a lovely job of showing the different markers. Perhaps like us,  you’ll find at the end of watching it that you have something in your eye. Just saying:

One thought on “A Very Unique Cemetery”