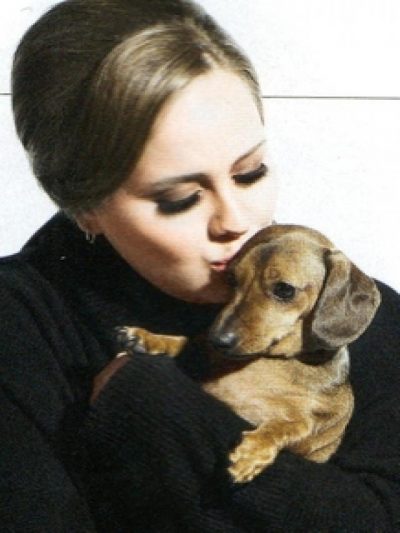 We don’t know too many people who don’t like the singer, Adele. If you’re among those who don’t, however, would it help you to know she’s a purebred dog owner? Adele’s Smooth Coated Dachshund was born the night Adele attended a Britney Spears concert in London. She almost called the dog “Britney” (though he’s a boy), but also considered naming him after one of Adele’s favorite football (soccer) stars, Aaron Lennon.  In the end, however, once she heard her little Dachshie howling to a Louis Armstrong record, he was named, “Louie.”

Louie has appeared on the cover of Nylon magazine with Adele, and accompanies his mistress to parties and interviews (though she reports her horror when Louie “farted” during her interview with the Irish Times, something she laughs about now).  Louie also made an appearance in Adele’s track-by-track video interview about her 2011 album, “21.” Adele has said that Louie is the “love of her life.”

If you still don’t think you like Adele, take a look at this fun video, a part of the “Carpool Karaoke” series shot for The Late Late Show with James Corden, and see if you don’t find her imminently likable.