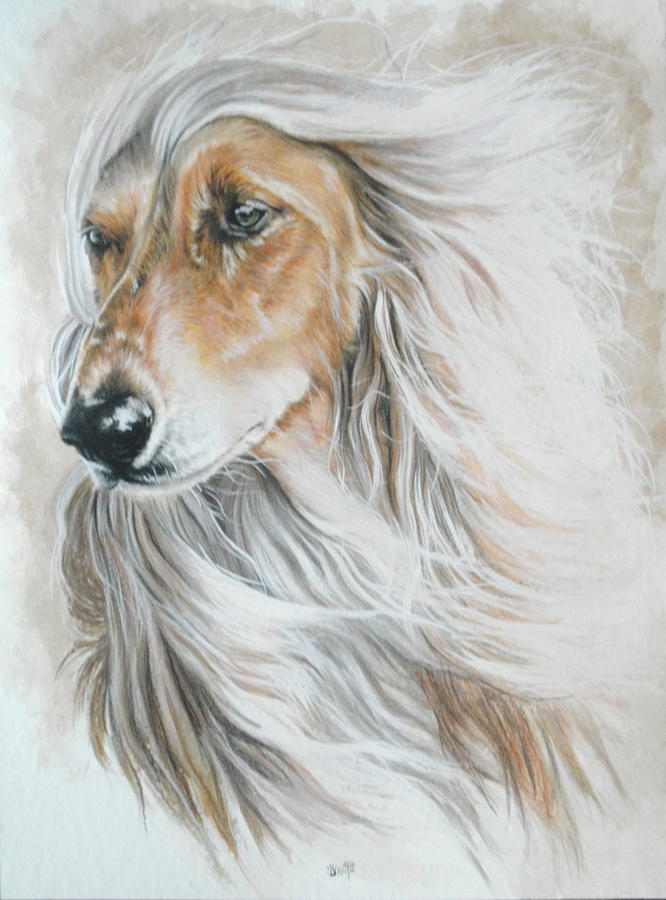 How often have you heard us say that little is known about a breed?  As we see it, this is a badge of honor owing to a breed’s antiquity, and the Afghan Hound is certainly no different.

The original name in Afghanistan for one of the oldest among breeds was “Tazi,” a breed thought to date back to the pre-Christian era that may have originated in the Middle East and found its way into Afghanistan via Persia. There is no pictorial record of the breed since Islamic culture in the country of origin forbade the depiction of animals in art. The only known early illustration was done in 1813,  an etching of a native soldier with a dog remarkably similar to young Afghan Hounds of today.

The Afghan Hound is a member of the group of sighthounds known as Eastern Greyhounds. She was bred to course gazelle, hare and sometimes big cats over the rugged terrain of Afghanistan, her ability to run fast and traverse highly valued. Afghans were required to be independent thinkers who often hunted alone and held dangerous animals at bay until the huntsman caught up on horseback.

It wasn’t until the 19th century that the breed was discovered by the Western world. British officers returning from the Indian-Afghanistan border wars brought back dogs from the area to England, some of which were exhibited at dog shows as “Afghan Hounds,” some as “Barukzy Hounds,” and some as “Persian Greyhounds.” The dogs generated interest, but not until 1907 with a dog named “Zardin” did the Afghan Hound get real notice. His owner, Captain Barff brought Zardin home from Persia via India, and with his impressive coat and dark mask, he was a total eye catcher.  In 1925, his description by the Indian Kennel Club was the basis for the first and subsequent UK Breed Standards, and it’s said he would have fit in with today’s vision of the breed.

In America, it was Zeppo Marx and his wife who brought from England a bitch named “Asra of Ghazni,” and a dog, “Westmill Omar,” in 1931.  Asra and Omar were later acquired by kennels in Massachusetts owned by Q.A. Show McKean. These, and dogs McKean added soon after formed the cornerstone of the breed in America. In 1934, there was but one Afghan Hound entered at Westminster. The next year, there were fourteen, a measure of how quickly the breed become established in the USA with a boost from McKean.

2 thoughts on “A Snippet of Afghan Hound History”