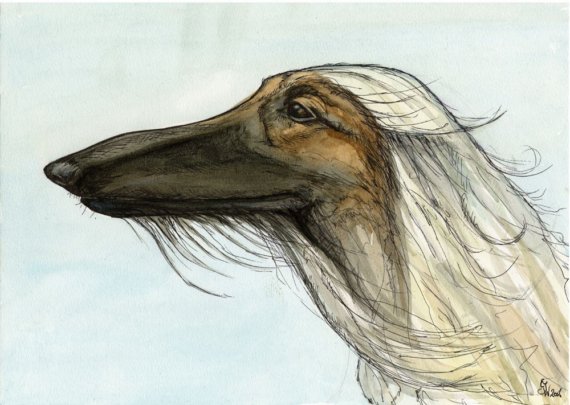 Tribesmen hunters of Afghanistan called the Afghan Hound, “the dog of Noah’s Ark,” and the legend that two Afghan Hounds were taken aboard Noah’s Ark is a strong and persistent one. As the story goes, the dogs were among the last to board, and by then the ark was so full that the poor dogs had to stand at the door with their noses exposed to the rain and wind. During the tempest, the ark sprang some leaks, and while Noah was able to plug some of them, there were a few he couldn’t get to. He appealed to the faithful Afghan Hounds who stopped the leaks by putting their long noses into the holes.

Who doesn’t love a good legend? The thing about this one, however, is the kernels of coincidence. In their wonderful book, The Mythology of Dogs, Gerald Hausman and Loretta Hausman write, “Although the Afghans’s presence in the Bible may be more myth than fact, one can still follow a “biblical map” upon the plain that is now part of Nigeria. Here, in the old African kingdom of Bornu, the ancient hound’s relatives were said to set forth and multiply. The word, “Bornu,” in fact, means “the country of Noah.” The geography itself is a vast tableland near the edge of Lake Chad where African myths say Noah’s family touched down after the Great Flood.”

One thought on “Noah’s Dog”