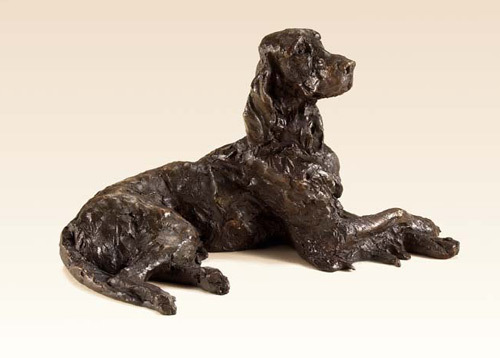 Perhaps it’s the thinking of dog geeks, but we’re inclined to think that the ancestry of one’s breed is as interesting as anything one might find when researching their own family tree. Certainly there are as many interesting or personal stories to be had as anything found by a genealogy site.

Ahascragh is a village in east Galway, Ireland situated on the Ahascragh/Bunowen River. It’s served by five pubs, two undertakers, a general goods store and a primary school. One wonders if the fact that the community described as the ‘safest village in Ireland’ by “The Irish Daily Mail” newspaper has anything to do with the town having its own patron saint, and if so, Saint Cuan is doing a good job.

Back in the day, the good Reverend H. Mahon (1750 to 1838) was one in a long line of Mahons, major landowners in County Galway with a full 8,619 acres to their name. Living in Castlegar, he was an ardent sportsman and owned many setters, all of which were red and white. In his opinion (which he shared often with his son) this was the true color of the Irish Setter. That same son expressed in a later interview that wholly red setters were rare, and they were considered more difficult “to break” (train?) than the red and whites, which, he added, were smaller.

That said, the family did keep a strain of the red dogs that were highly prized, and they were called Ahascragh Setters, but family lore hints that poor breeding choices made by the gamekeeper, Jemmy Fury, degenerated the line “into weeds.” He mentioned that with one dog in particular, “Sylvie,” a big bitch, beautifully feathered, very enduring and staunch, he hoped to resuscitate the Ahascragh strain, but the death of his father led him abandon the effort.

The Ahascragh Setters of the 19th century are now extinct, but they remain part of the breed ancestry.