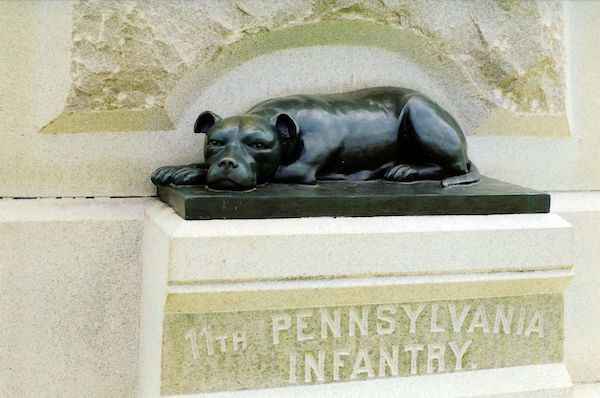 It was the Civil War, and Sallie Ann was a local beauty who frequently visited the camp set up by the 11th Pennsylvania Infantry, Pennsylvania’s oldest unit in continuous service during the war. It was her namesake, however, who would become the heart and soul of the infantry.

The “second” Sallie arrived in a wicker basket. She was an American Staffordshire Terrier puppy gifted to Capt. William R. Terry of Company I by a resident of West Chester close to where the regiment was training at Fort Wayne. The men named the puppy Sallie Ann Jarrett in honor of their lovely visitor and their colonel, Phaon Jarrett.

Sallie became more than the camp mascot.  She marched into some of the bloodiest battles with her comrades, always taking her place in front of the regimental commander’s horse. She was at the front lines of at Antietam, Chancellorsville, Second Bull Run, and the Siege of Petersburg. She guarded the dead at Gettysburg.

She belonged to every man, and every soldier took turns feeding and caring for her. They got to know and love her, and liked to brag that Sallie Ann only hated three things:  Confederates, Democrats and women. It’s said that when the Army of the Potomac passed before President Abraham Lincoln in review, Lincoln saluted each unit as it went by, but tipped his stovepipe hat to Sallie as she lead her regiment in the spring of 1863.

It was at the disastrous Pickett’s Charge that the 11th was overrun, and Sallie got separated from her unit. The men feared the worst, but Sallie had become trapped behind enemy lines. When medics returned to the battlefield two days later, they found Sallie lying with the dead and wounded, hungry and half dead from exhaustion.

More battles came, and the men whom Sallie had loved left for the front, replacements taking their place. During the siege of Petersburg, Virginia, the 11th was called to block rebel supply lines. The day after that, Confederate fire essentially leveled the 11th’s front line. Among the fallen was Sallie who’d been shot in the head. She was buried where she fell, and while the 11th Pennsylvania carried on without her, the men never forgot her.

Twenty five years later, survivors of the 11th Pennsylvania gathered in Gettysburg for the unveiling of a monument to their regiment. At the top of the granite was a replica of a Union infantryman, but lying at the base was Sallie Ann, still looking out for her friends.

The monument is still at Gettysburg today – it’s off Doubleday Avenue on Oak Ridge in the military park. We’ve read that tributes to Sallie Ann are often left for her: dog treats, biscuits, and flags.