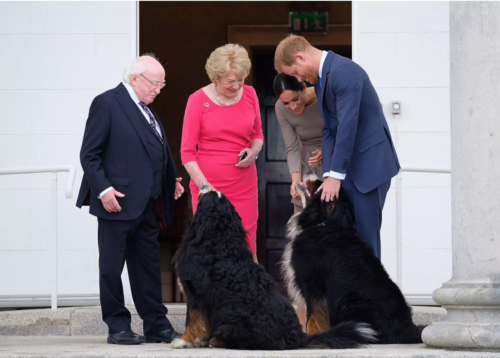 On the second day of the Duke and Duchess of Sussex’s royal tour of Ireland, they made new friends.

But first things first. A dukedom is often given as a wedding gift to senior males in the British royal family, so when Prince Harry married Meghan Markle last May, Queen Elizabeth gave the couple an official dukedom, that of Sussex.

Now that we know that the Duke and Duchess are Prince Harry and Meghan, we can get back to the new friends they made while visiting President Michael Higgins and his wife, Sabina Coyne, at Aras an Uachtarain,  the 18th century house of the Irish president. It wasn’t the Irish president and his wife who were the new friends (although everyone looked like they were having a lovely time together). No, it was “Bród” (meaning “pride” in Gaelic) and “Sioda” (which means “silk”),  a pair of Bernese Mountain Dogs who joined the royal couple as they toured the grounds.

At the twenty second mark of the video clip below, you can see these loveable mooshes in action:

A recent study of pet ownership in Ireland found that over 49% of households now own a dog (though a poll of non-dog lovers in both Northern & Southern Ireland found that 87% of people questioned were unable to name any native breed of Ireland other than the Irish Wolfhound). That aside, Ireland is a pet loving nation, and that includes 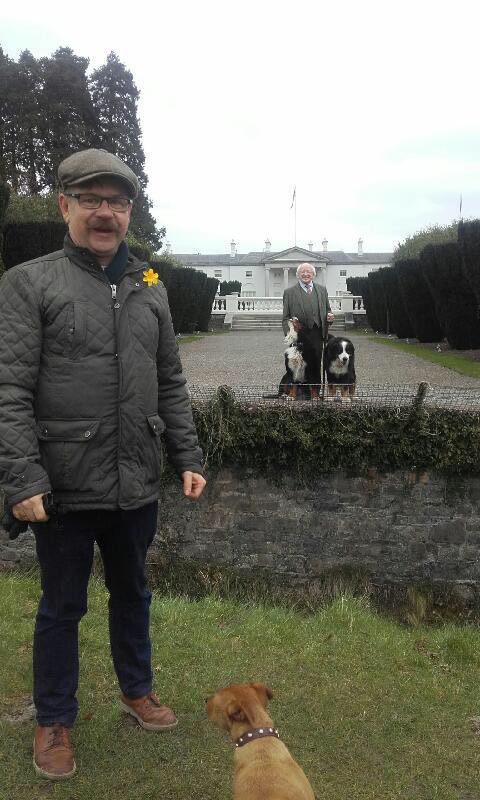 Higgins has had Bernese Mountain Dogs for over 19 years. In 2012,  he took in “Shadow,” a Berner left homeless when her previous owners emigrated to South Africa. The pair reluctantly – but wisely-  returned Shadow to her breeder, Valerie Hughes, who re-homed the dog with President Higgins. The President later added Bród and Sioda.

Shadow and Bród made headlines in 2016 when they (and their owner) photobombed a local barber, Danny Callaghan, from The Dublin Barber Shop as he was out for a stroll in the Phoenix Park (photo right).

For more terrific pictures of President Higgins and his Berners, click here.