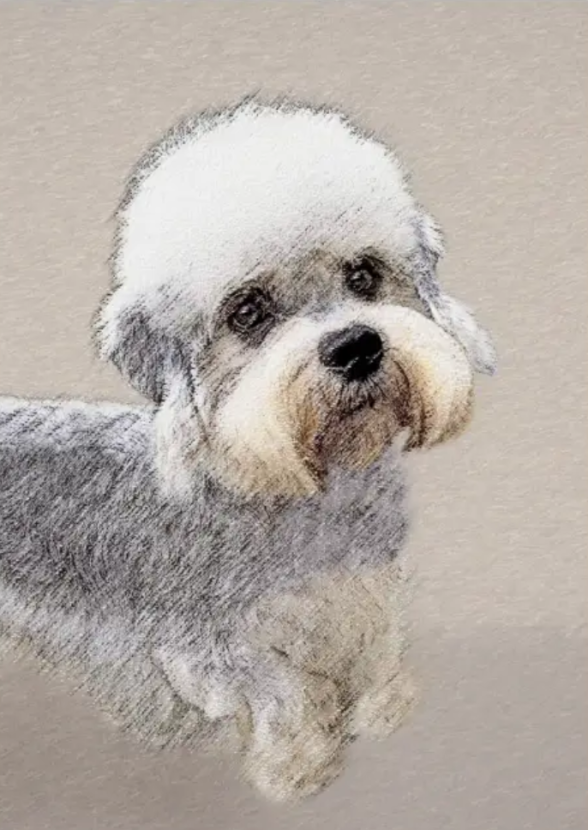 There are so many singular aspects to the Dandie Dinmont Terrier’s story that it’s tempting to write of it as the “only” breed with so many “onlys” and one important “first.”

The Dandie Dinmont Terrier was the first terrier to have an actual breed name. It was first recorded as a distinct breed in the early 1700s, a terrier said to have descended from the rough native terriers found in the Teviotdale Hills between the borders of England and Scotland. There, farmers and itinerant peddlers known as tinkers bred a long-bodied terrier with a unique topknot, a crisp double coat co-mingling two types of hair, and a sweet-disposition-turn-demonic at the sight of vermin. The breed’s earliest origin remains unknown, but dogs owned by the Allans of Holystone, Northumberland in the early 1700s are thought to have been involved.

It is the only breed of dog that can trace the origins of its name to an exact day, month, and year.  Every Dandie in the world goes back to “Old Ginger,” a dog born on June 4, 1842. Old Ginger’s grandfather on his dam’s side (The Mertoun Dandie) was bred by the writer, Sir Walter Scott, himself. It was Scott who named the breed after a fictional character in his novel, “Guy Mannering,” a tale of smugglers that introduced the tough but friendly Liddesdale farmer, Dandie Dinmont, whose nature reflected his six “Pepper and Mustard Terriers.”

“He evolved from the Scottish Hillside, the grey mists forming his body, a bunch of lichen his topknot, crooked juniper stems his forelegs and a wet bramble his nose.”
——————-Sir Walter Scott

The Dandie is also the only breed in the entire world to have its own clan chief approved tartan. In 2015, Richard, Duke of Buccleuch, and chief of Clan Scott, gave his blessing for Dandie Dinmont Terriers and their owners to wear the Sir Walter Scott Black and White Tartan as the breed’s “official” tartan** (Ed note: About tartans: Back in the day, every clan created its own distinctive tartan to distinguish one clan from another, an important distinction to have since they were often at war).

It’s possible that the Dandie is the only breed whose name was slightly altered through punctuation. After Guy Mannering was published in 1814, people were keen to own one of “Dandie Dinmont’s terrier, but the apostrophe “s” was eventually dropped which changed the name from a possessive to a proper noun.

As an interesting side note, when Dandie experts from both sides of the border met in Melrose, they forged the original written Standard for the breed. For about a century, the British standard remained as written (with a wee amendment regarding the desired weight range); only when England’s Kennel Club required that all breed standards conform to the same format did the the original Dandie Dinmont Terrier standard from 1876 change.

To our knowledge, Canada remains the only country in the world that accepts the original standard, and it is unique in that regard. Original standards make for wonderful reading, and the Dandie Dinmont Terrier Club of Canada maintains that the original standard is “one of the ﬁnest written and most descriptive and instructive of any breed standard.” Read it for yourself and see if you don’t agree.

Image: Dandie Dinmont Terrier by Alpen Designs is offered in a variety of formats here