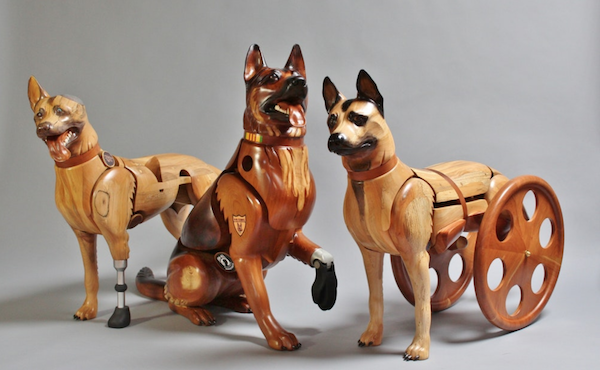 It is staggering to imagine giving up one’s dog for the greater good, but that’s precisely what happened during the Great War between the years 1914 to 1918. After Colonel Edwin Richardson began the War Dog School, the demand for trained dogs exceeded supply, even when the Battersea Home of Lost Dogs was suppling the school with strays. Despite Britain’s Home Office ordering police to round up all the strays of certain breeds they encountered for the school, it was still insufficient.

Ultimately, an appeal was made to the public to donate their dogs, and donate they did. Mixed breeds were offered up, but so were dogs with show championships, and dogs with impressive pedigrees. They were donated by the dozens every day, though truth be told, there may have been ulterior motives borne of kindness in relinquishing the family dog. This was war time. Food was in short supply for people, let alone dogs, and donors likely reasoned that at least in the army, their dog would get food and be given good care. In one BBC article about these dogs, note was made of the woman who wrote after the appeal was put out for dogs, “I’ve given my husband and my sons, and now that he too is required, I give my dog.”

The dogs faced decidedly un-dog like situations. They were trained to wear gas masks, and had to learn to cope at thunderously loud front lines that were both terrifying and dangerous.

Given what we know about Colonel Richardson, the use of Airedales is well documented, and these terriers proved to be versatile, brave, and heroic. They were used not only as sentries and couriers, but as rescue dogs, and in them, Richardson found what he considered to be the ideal dog.  Their determination made them single-minded, though perhaps challenging to train.

They were hardly the only breed at the school, and students of dog history may already know of the Irish Terrier’s involvement in WWI. Richardson himself wrote, “I can say with decided emphasis that the Irish Terriers of the service more than did their part. Many a soldier is alive today through the effort of one of these very terriers. My opinion of this breed is indeed a high one. They are highly sensitive, spirited dogs of fine metal, and those of us who respect and admire the finer qualities of mind will find them amply reflected in these terriers. They are extraordinarily intelligent, faithful and honest, and a man who has one of them as a companion will never lack a true friend.”

What we of today may find surprising are the other breeds that were recruited and trained during this time, typically in the capacity of messenger dog. Greyhound, Whippets, Dalmatians and Bedlington Terriers! Rough Collies, and Pointers. Welsh Terriers, Setters, Bull Terriers, Eskimo Dogs and even Bulldogs were used. In fact, one of the very best messenger dogs of the war that Richardson trained was “Tweed,” an Old English Sheepdog who never faltered or erred. In a future post, we’ll talk about how unlikely a candidate Tweed was for his war time job.

Dogs – a good many of them purebreds, are among the forgotten heroes of World War I, astounding when more than 50,000 of them served as sentries, scouts, guards and the dangerous “mercy dog” role. They pulled carts filled with munitions, and sometimes, their carts held soldiers too, both the wounded and the sound.

We prefer to think that when John McCrae wrote In Flanders Fields, he included the dogs of that war:

In Flanders fields the poppies blow
Between the crosses, row on row,
That mark our place; and in the sky
The larks, still bravely singing, fly
Scarce heard amid the guns below.

We are the Dead. Short days ago
We lived, felt dawn, saw sunset glow
Loved, and were loved, and now we lie
In Flanders fields.

Image: One of the wooden sculpture created by master Ohio craftsman, James Mellick, for the Wounded Warrior Dogs Project. a video of the installation (see below) is incredibly moving:

2 thoughts on “An Unpayable Debt”