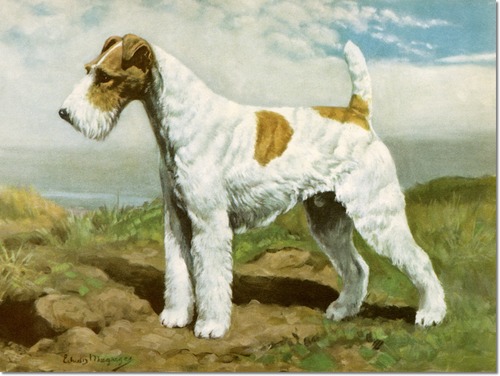 “Bang” isn’t a word the average person associates with tails, but when one does an internet search on the term, one of the first usages (in animals)  one is likely to encounter is: “How to Bang a Horse Tail” (an equine “hairstyle” popular in dressage and eventing. Sometimes, a horse tail that has been “banged” has been cut horizontally across at the end).

In dogs, however, it has to do with tail set and posture. Specifically, a “bang on tail” refers to a dog whose tail is “bang on,” or set properly and stands up high. Think of it as a tail that is saluting. The tail of a Wire Fox Terrier is good examples of a “Bang On Tail.”  According to its AKC breed standard, the tail should be “set on rather high and carried gaily but not curled…of good strength and substance and of fair length-a three-quarters dock is about right – since it affords the only safe grip when handling working Terriers.”